Anyone who knows me knows I love growing potatoes. They are like magical tasty gifts from nature when you pull them up out of the ground.

You can grow them in pots, or in the garden. You can buy special seed potatoes, or you can plant whatever is sprouting in your cupboard.

Sometimes things go wrong, but most of the time when they do, you still have potatoes. They’re the greatest vegetable to grow.

This is maybe the most confusing part of the process. There are 24 different varieties sold by the biggest potato supplier in New Zealand, Morton Smith-Dawe.

They split their varieties into early, second early, and main seasons. I’m still not quite convinced I understand what it all means. As far as I can tell it’s got to do with daylight hours, time to mature, and suitability for longer-term storage.

‘Early’ crops go in as soon as the frosts have passed. In Northland last year I planted them in early July! I did protect them with a plastic cloche, but I didn’t really need it. These crops typically mature fast – Rocket and Swift varieties can mature in as little as 2 months!

Main crops can go in a little later in the season. Last year I planted ours in October. Agria is a main season crop. While we experiment with our early potatoes each year, Agria is our main-season staple. Main season potatoes will store better than early ones, so grow heaps. We planted 6kg last year and harvested 60kg of potatoes!

If you’re growing taewa (Māori potatoes), plant in December when the day hours are long, and aim to pull out before the first frosts or when the plants die back. They form tubers in autumn as the days get shorter.

Certified seed potatoes will cost between $5 and $15 depending on the size of the bag, and where you get them. They are more expensive than the potatoes in your pantry, but they are also guaranteed to be free of disease – making it heaps easier to get a good crop.

Some garden centers (and Newton’s Seeds online) will sell ‘per potato’, if you’re looking for less than a kilo of seed potatoes or want to try a few varieties.

The potatoes sprouting in your pantry will grow if you follow the rest of these instructions, but they may not grow as well as a certified seed potato might.

Chitting means to let the potatoes start to go green and grow shoots. This gives them a head-start when you plant them and reduces the chance they’ll just rot in the soil. 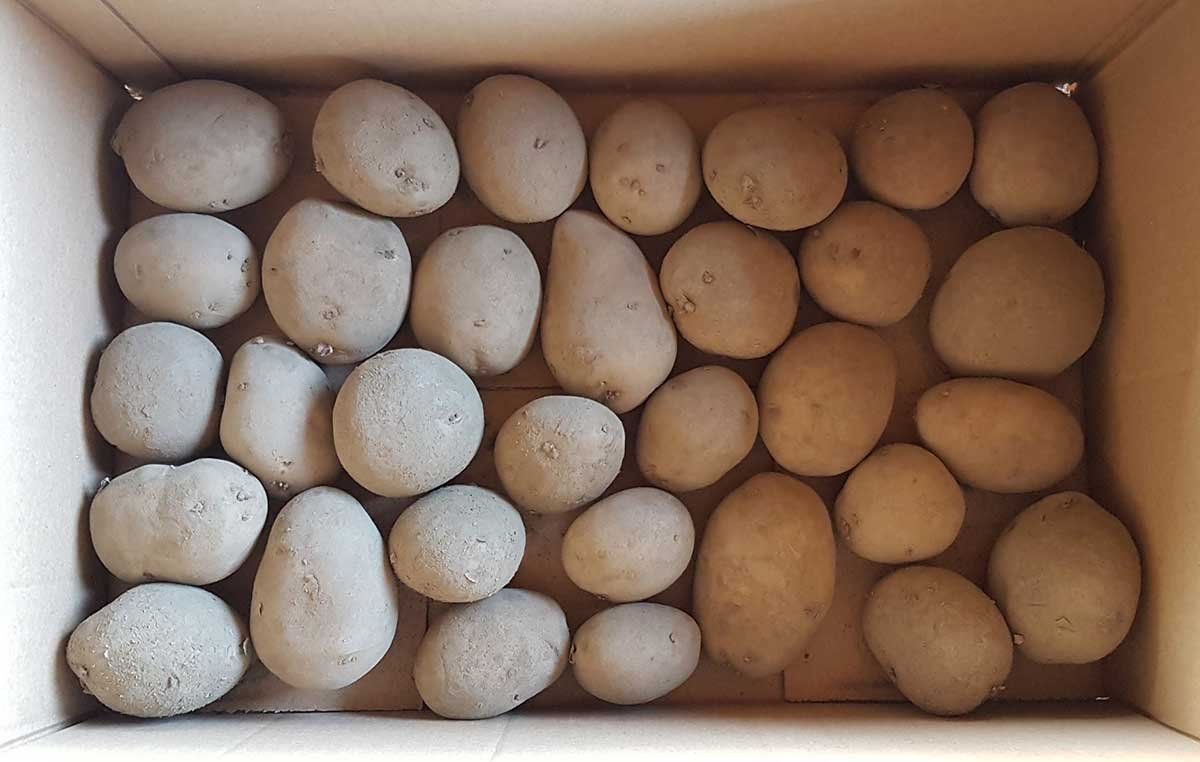 Apparently keeping onions and potatoes together makes them both sprout faster. I played with the idea to see if it could help in the garden, but I didn’t notice anything spectacular.

Keep the potatoes somewhere they are dry, but exposed to indirect sunlight. After at least a month, you’ll notice they’re ready for planting.

Avoid adding lime to your garden before potatoes. They prefer a more acidic soil and lime makes the soil more alkaline.

Our potatoes have always done best in lasagne gardens, which we fill with manure, compost, and grass clippings.

If you want to grow in containers, source yourself some 40l flexibins. Try to avoid the light colours as sunlight makes potatoes inedible. Drill some large holes in the bottom for drainage.

For every flixibin you plan to plant, you’ll need about 5 seed potatoes and a 40l bag of potting mix. Start by spacing your potatoes ontop of the soil. Give your plants at least 20cm space. Space them out evenly to work out where the holes will go. 2. Dig and place in holes

Sprouts should be facing up. 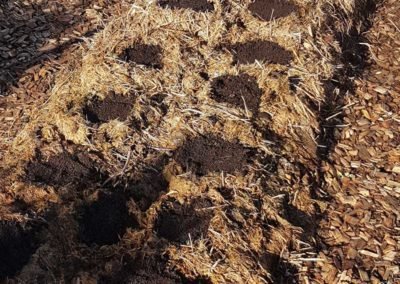 3. Cover with dirt or compost Don’t let them get big before starting your layers. Cover the sprouts completely in compost or soil. 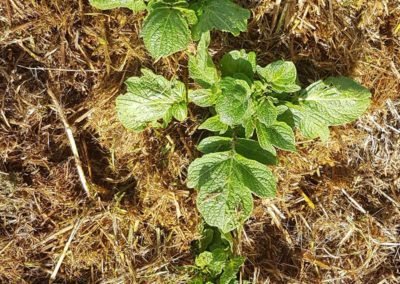 When the sprouts appear again, mulch under the leaves and around the stems. Repeat 3 or 4 times with compost and grass clippings

Keep mulching up the stems with alternating layers of compost/soil and grass mulch for up to 6 weeks. Eventually it will be really difficult and you can just let them grow from there.

In flexi-bins, fill to about 20% with potting mix before you space your potatoes evenly inside it. Cover the potatoes completely with soil. As the leaves begin to emerge from the soil, cover them up again. Keep going until the bin is full.

When can you harvest your potatoes?

One sign your potatoes are growing tubers is if they flower. Not all varieties do, but if you see flowers, you know your plant is working hard and growing potatoes.

Use the Morton Smith-Dawe chart to check the growing time and flowering status of your variety if you know it.

If your spuds don’t flower, then a couple of weeks before you’d expect them to be ready, you can have a forage around near the stems to see if you can find some new potatoes. The skin will be quite soft, so be careful. 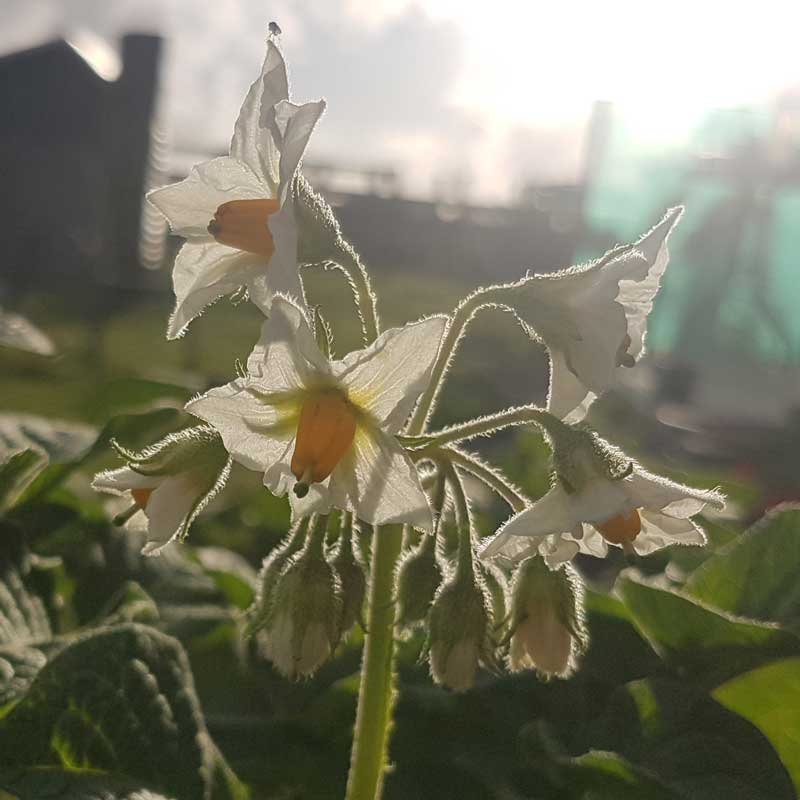 If you want to store your potatoes, you need to wait until the plants die back. At that point the skins will be tougher and ready for drying. Try to lift them from the ground before any rain, and use your hands rather than tools to avoid damaging the spuds.

I’ll have another blog later on how to prepare your potatoes for storage. If you want to know when that’s published, sign up to the mailing list below to get it directly in your inbox.

Get The Latest In Your Inbox!

Join the mailing list and get these blogs directly to your inbox, as soon as they're published!

Buy me a coffee