Last week marked our first trip around the sun as caretakers for this place. We took possession of this property late in the afternoon of 30 July 2019. Since then we’ve lived through drought, flood, and pandemic.

I’ve spent some time reflecting on what’s happened over the first year here. One of the things I consider as a kind of ‘KPI’ for my guardianship, is how many trees I have planted. When I counted them up, we’d planted around 30 trees. Mostly fruit trees – and sometimes I was stretching the definition of a tree. It didn’t feel good enough.

I had a few planting ideas I’ve been thinking about. Winter is the right time to plant native trees. And I had 110 native trees waiting to be planted. Our soils are pretty moist now after all the rain this month, but the weather last week was rather mild and clear.

I set myself a goal: plant 100 trees before the year was up.

In the end, I got to 70 by the anniversary – bringing us to a total of 100 trees in the first year. The rest will go in over the next month to start counting towards Year 2.

The property next door is on the market, and we went out for a walk to the house site a few weeks ago. Looking back on our place from there, I realised we needed a privacy screen. We get a pretty mean southerly hitting us from this direction, so I’d already planned a row of clumping bamboo along this line. But I’ve been having problems sourcing enough at a price I don’t hate. I can always find another spot for a bamboo grove though, so I decided to go ahead with purple akeake (Dodonaea viscosa) instead.

We’ve got a good supply of akeake. I purchased some seeds from TradeMe last year and raised them over summer. I ended up with over 70 seedlings. They’re between 20cm and 30cm now, and should grow fast – up to 4-5m. They’ll grow pretty much straight up, and should be receptive to the hedge sheers.

On the first day of planting, Richard and I put in 25 akeake to the southern edge of our container at a 1m spacing.

Our poor cabin, it gets hit with everything. When it’s windy, it gets a bit of a rough time. When it’s sunny, it heats up like a frying pan. All this weather comes from the north-east, and it’s clear we need to do something about it. We’ll sacrifice some of our view, but hopefully by the time it gets that tall we’ll be looking to build our house anyway. This planting also begins the landscaping behind my preferred house site (which is more protected by the topography than the cabin site). It will hopefully provide shelter, shade, and some erosion control.

In this direction, we need hardy natives that are OK with drought, wind, and full-sun – as well as partial shade in the future. I’m using three species here – both green and purple varieties of akeake (11); mānuka (Leptoporum scoparium) (7); and kōhūhū/black matipo (Pittosporum tenufolium) (3). There’s also a cheeky bright pink hebe near the duck pond.

These should grow up to 4-6m, but we can prune and shape them in the future if we need to. At the moment there are 22 plants in this zone, with room for more.

When I wrote about planting our bananas, a few people suggested they wouldn’t like the wind in this position. Those people weren’t entirely wrong. The bananas are still alive and still growing, but it’s clear they’re not fond of the wind.

That’s going to be what it is for a while, but the wind protection is starting to grow in (tagasaste grows fast). We added another 24 trees to this area in the last week: 9 akeake, 7 kōhūhū/black matipo, and 8 mānuka. They join 3 kānuka and a kōhūhū we planted earlier in the year. This strip lies between the main garden and the bananas. We’ll be adding a fence on the garden side at a later date. It will both provide a border ecosystem to the garden, and give the bananas more wind protection.

Planting method and the future

There’s nothing fancy going on here. We’re cutting off the kikuyu mat, flipping it upside-down, and placing it at the lower side of the hole to help catch water.

Then we’re digging a hole, planting a tree, and adding a spade-full of compost for good luck. Finally, I’m using these mulch mats and biodegradable pins I picked up cheaply on TradeMe. I got over 100 of them + pins for $52 (around the same cost as a cubic meter of mulch). 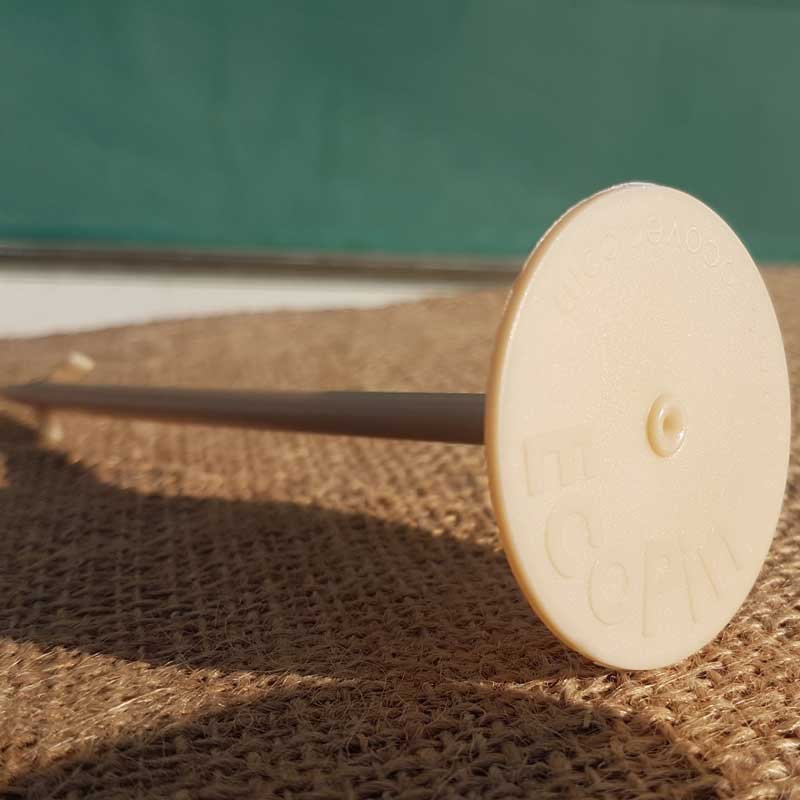 The mats are fairly labour-intensive to install, mostly because the pins are very brittle (which I’m assuming is mostly from their age). But they do keep the kikuyu off pretty well. Most importantly, they’re excellent at preventing the chickens from digging the trees back up!!

In time, we’ll add a layer of mulch made from the Taiwan cherry trees currently residing in (and due to be removed from) our native bush. But the mats give the trees a chance to establish themselves first.

I’ll keep them hydrated over summer with water from duck pond. This is some pretty nutrient-rich stuff and should help them establish quickly.

100 trees sounds like a lot, but it’s such a tiny percentage of the space we have. There are plans in my head that require many, many more trees. I am growing them from seed (especially seed from our native bush), but my aspirations far outstrip my current nursery(wo)man skills.

So each planting is being registered with Trees That Count. Partially for record-keeping purposes, but also because it will begin to open the doors to funding for future plantings. In the program, you’ve got to prove you can plant and look after natives before they’ll give you free trees. Makes total sense. Specifically, you’ve got to plant and maintain 100 native trees before you can apply for funding.

The plantings I’m doing this year would best be described as ‘landscaping’. They are all planted to improve conditions around our main living compound.

The Trees That Count program won’t fund trees for landscaping projects. But it looks like they will ‘count‘ them towards partial funding for future restoration projects. I have some rather big ideas for restoring parts of the property, so this is one way to start the ball rolling on that.

In the end, I think planting 100-odd trees in our first year + another 40 early on in our second is a decent effort. Obviously, my ‘KPI’ expects an improvement on performance next year, so I want to plant at least another 150 over the next 12 months. I’m already working on growing the next lot.