As it turns out, I am no longer allowed to call my garden disappointing. This week I have harvested multiple broccoli heads weighing in at over 500g. I’ve also dug out giant potatoes, picked perfect pak choi, and plucked more radishes from the ground than I have any hope of ever eating. 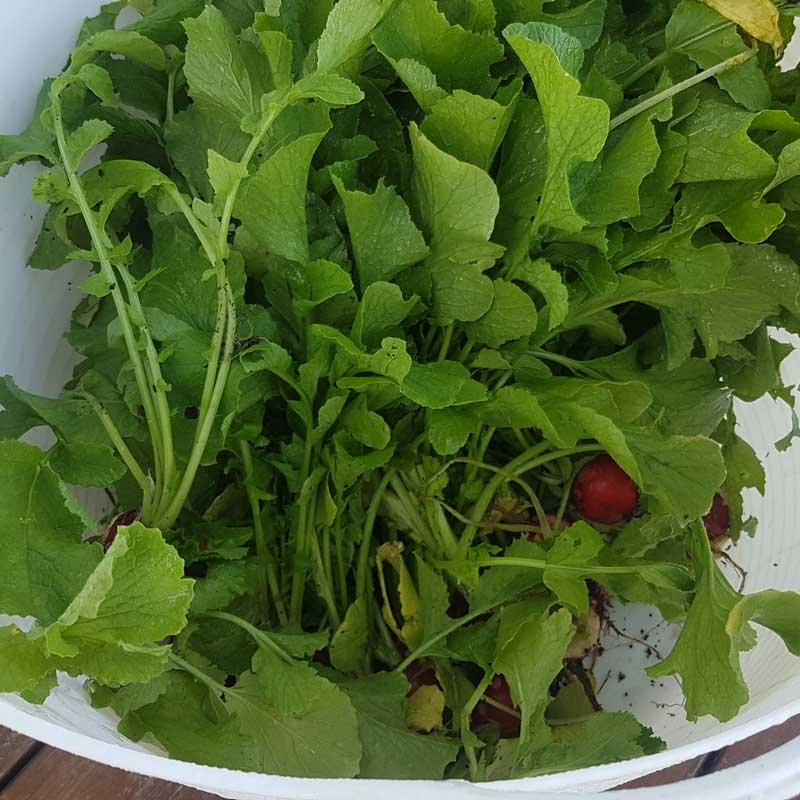 Thankfully, not much goes to waste here. We have a brood of hungry chickens and ducks who are happy to eat pretty much anything. The worms generally eat anything they don’t. And I spend a fair amount of time freezing and preserving the bounty that’s coming out of our productive piece of soil.

One of the things I have nearly perfected is storing tomatoes. For two people who only eat cooked tomatoes, we have a ridiculous amount of them coming out of the garden at the moment. But that’s totally OK – I use them a lot in my cooking, and they’re pretty easy to process and store. They freeze really well, but I tend to can them and save freezer space for other things.

Canning the tomatoes takes time. It’s a process. And for many people, the joy in growing tomatoes is in eating them fresh. The range of flavours and colours that can be achieved in the garden is generally superior to those purchased in a supermarket. For us – at least until we have a year’s supply – I am basically replacing canned tomatoes. Canned tomatoes are a very cheap commodity. So what’s the point?

Last year I read a series of articles on Newsroom about the cheap, tinned tomato industry. To sum it up: it’s pretty gross and includes mafia ties and slave trading.

Knowing the cheap tomatoes we can buy in supermarkets for less than a dollar are only achievable through slave labour, the maths around tomatoes changed for me. The price for an ‘ethical’ can of tomatoes ($2) is nearly 3 times the price of the cheapest tin ($0.70). In our garden, we have 5 plants I grew from seed that we transplanted in January. Now, in May, they are still in flower and producing plenty of fruit. I’ve already got jars and all the equipment I need. Throughout the entire canning process, I only use tomatoes, water, and a little bit of white vinegar to act as a preservative. The only real ‘cost’ is my time. And I am able to consent to being paid in the canned tomatoes I worked to grow and preserve.

We still get to enjoy all the smugness and deliciousness that comes from growing our own, with the bonus of not contributing to the general misery of capitalism.

I’ve been doing this for 3 years now. At first because tomatoes were a plentiful resource that I could learn canning with. Now, there’s more of a moral aspect to it, and I’m looking to hone the process for the longer-term.

Starting with the variety I grow. The first year I did this, I grew a couple of F1 varieties that would have fewer disease issues. They grew well and gave me very few problems in the garden. But they were your average, round tomato, and they contained more water than anything else when I processed them.

The next couple of seasons (including this one), I’ve grown a long ‘Italian’-style tomato called San Marzano.

I’m fairly convinced Italian tomatoes are the ones we buy in cans because they’re easier to process, and they contain more flesh than water. San Marzano can be a bit prone to blossom-end rot, but I’ve had fewer problems with it this year. And it’s ‘tubular’ shape is significantly easier to trim, peel, and chop than a round tomato.

San Marzano is also an ‘indeterminate’ variety, meaning it ‘prefers’ to climb. Our garden is productive, but very windy, so mostly I’ve allowed them to just lazily grow over the ground. I put ‘prefer’ in quotes because my indeterminate plants all over the ground seem to have fewer diseases, and be overall more healthy than the plants I’ve managed more intensively in the past. We’re definitely getting more tomatoes than when I grew the same variety last year.

It’s made me think that perhaps I should try a ‘bush’ variety of tomato next year. They’re even more adapted to just lying all over the ground. Maybe I’ll get even better results. Kings Seeds has a variety that seems to fit the requirements, so I’ll get some in my next order for planting in October. While we’ve had fewer disease issues this season, we do have populations of armyworm and green vegetable bug causing problems. So we’ve been harvesting the tomatoes while they’re green to reduce the pest-burden. I rinse them in cold water with a splash of white vinegar to discourage any microorganisms, then leave them to dry overnight. Then they get put into a cardboard box and left in a dark, warm place (the container, in our case) to ripen.

I check on them every couple of days. Once the colour starts to turn, I bring them inside to sit with a banana. Bananas produce a lot of ethylene gas which triggers ripening, so it helps speed up the process. Then about once a week I blanch, skin, and can them for storage.

There’s only so many plain cans of tomatoes a household can eat in a year though, and we’re not too far away from that point. So once we’ve got enough, I thought I might give tomato sauce a try. Have you got a good recipe? I’d love to know about it!