About a month ago, I received a trail camera for my birthday. At the time I knew it would be handy, and probably fun. But it turns out I massively underrated both aspects.

It took a week of playing around with a locations for it. But I ended up setting it on a punga right beside a track that had been worn in by many feet, claws, paws, and hooves.

On a wander through the area, Roxy had picked up on some pig poo nearby. I figured putting it here, we’d be pretty likely see something interesting.

Over the next couple of weeks, we saw a quail, a hedgehog, a rat, pair of pigs, and a family of possums using the track. 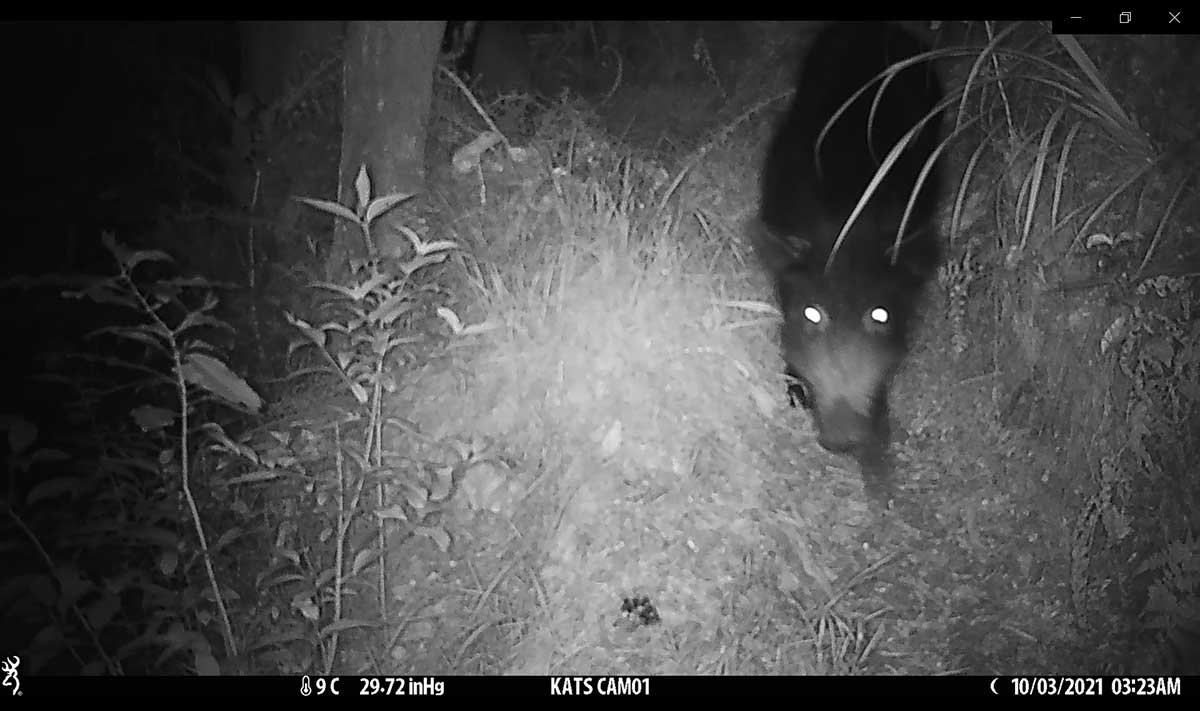 The possums were pretty distinctive. They appeared to live in a totara just at the top of the frame. There was a mama and baby, plus a big daddy. They showed up a lot, and usually together.

As cute as possums are, they’re also destructive little fuckers: they eat eggs and chicks of native birds, will take a munch on a native insect, and absolutely destroy the palatable plant species. Their fur also has value in the textile market. I like to bury them under trees as a natural ‘blood and bone’. It’s cheaper than fertiliser and I like the idea of ‘one fewer possum, one more tree’.

They needed to be removed, and the simplest way to do that is to use traps. So the first step was to lure them into a false sense of security. Trappers call this ‘pre-baiting’.

I popped into my local fruit and vege grocer and picked up a few bags of little apples for $10. We cut them up and placed them about the area. Then we replaced them after Hine ate them all before we left.

We also set up – but didn’t set – our live capture trap. This trap means they are still alive (and whole) in the morning when we find them. They’re simply stuck in a cage, rather than held painfully. We prefer to find them alive as a freshly-killed possum is easier to pluck than a long-dead one. It also means the pigs (or our dogs) don’t eat them before we get there.

We left it alone for the night. When we picked up the footage the next day, all the baits were gone and we saw a little possum party.

The next day, we set the live-capture trap. Even though we didn’t bait it, the big male possum was inside it the next morning. The dogs were very happy about this development. Roxy hates possums, but Hine had never met one before. He was shot, plucked, and buried pretty quickly.

It was a couple of nights before we got back to check the camera and set the trap again. The footage from that time showed the mama and baby looking again and again for the apples. We laid more baits.

The next morning, Roxy disappeared. Sometimes she goes down the hill to find duck eggs, but she usually returns when we call. This time, she didn’t. And then we heard her. Barking her head off from the direction of the trap. She’d gone to check it without us. On arrival, we found the mama and baby in the trap – rather terrified by the loud barking dog (fair enough). They were dispatched, plucked, and planted underneath a nice pittosporum near the male.

A bit of watching

I monitored the spot for a few more days – though I moved the camera up the track and faced it back down. Without the ‘stars’ of our footage, there’s a lot less to go through now. We may need to find a new spot to watch.

But the fact is, the trail camera made trapping significantly easier. We knew who was taking our baits, where they lived, approximately how many there were, and exactly how much they like apples.

The camera also made it fun. Going up to change the SD card has become one of the highlights of any day. I am both horrified and delighted by what we’ve seen.

It’s even motivated me to get more on top of our weed management – being out there more, I see the weeds. I often head out with my weed-busting kit to remove some more cherry, gorse, or privet while I’m there.

So it’s been an interesting and worthwhile addition to our lives here. We are taking even more interest in our native bush, and using the knowledge we’re gaining to improve it. Sometimes it’s a bit messy, but mostly it’s just fun.