Last week we were having a normal Monday night – we’d got the cats inside, and we were watching something on Netflix when Richard noticed a whopping great cut on the side of our big boy Sam’s neck.

There was no blood, but it was about 6cm long. It was a clean, straight cut made by something sharp. The fur was split, exposing the skin layer beneath.

I couldn’t stand to look at it. Even though he didn’t seem remotely bothered about his injury, it didn’t take us long to decide he needed to see a vet.

Sam’s a hard, fierce cat. He’s one of three we adopted as kittens from a feral colony that lived near our old rental. Richard literally picked him up from under a busted car at about 6 weeks old. He’s lived with us ever since. He grew into a 7kg independent lump of a cat who loves that independence and hates the dogs. He’s the only resident of the farm that can run as fast – if not faster – than Roxy. He’s careful, but fearless. If Sam were still in the wild, it would mean real trouble for the vulnerable wildlife around the farm in Waipu.

Instead we keep him happy, warm and fed here with us. He brings us the occasional bird, frog or rabbit – but (fingers crossed, so far) has never bought us a native species. And he frequently brings his catches home alive (which is how we had a rabbit for a while there).

All of this is to say that we knew it was going to be an uphill battle to get this injury sorted out, but he’s been part of our family for close to five years now. We had to try.

First thing Tuesday morning, we called the vet. They set us up for an appointment at 2pm. We needed to keep Sam inside and mostly still until then. So he moved into Roxy’s crate for a day. Naturally, he hated it.

So we dosed him with some Kat’s Nip. Our cats normally get the discards – the discoloured stuff that doesn’t make the grade for customers. But that morning, Sam deserved the premium grade. He went for it and spent most of the morning sleeping.

Then it was time for the car ride. We popped him into the carrier and set off.

Sam hates the car. Always has. Even when the vet was 5 minutes down the road, he made his displeasure known for every second of it.

To move to The Outpost (a 2 hour drive from our ex-rental), we worked with the vets to dose the cats with diazepam and keep them calm. Not really an option for us now though, and it was going to be a 25 minute drive to the vet.

It was this, the entire 25 minutes into town. Hopefully he will still be drugged up when we pick him up in an hour and it won't be like this the entire way home as well. 🔊🔊 pic.twitter.com/VcTidNy3ww

He meowed the entire time. All the way there, all the way into the waiting room. He meowed while we scanned in and meowed when we sat down.

He didn’t stop until we got into the consultation room and the vet allowed him out to roam.

The vet agreed it wasn’t major, and even suggested it might heal on it’s own. But we believed it would just pop right open again if he went on with his normal life. He’d scratch it and lick it (or get the other cats to lick it) and it was too much of a risk for us.

So it was decided that he’d get a shot of antibiotics, have the wound cleaned, and stitched. We made ourselves scarce for a couple of hours and ran some errands. Then we came back to pick him up and pay the bill.

Thank goodness for the emergency savings account! He didn’t quite take the record for largest vet bill (that goes to another cat, Sabre), but it was close. 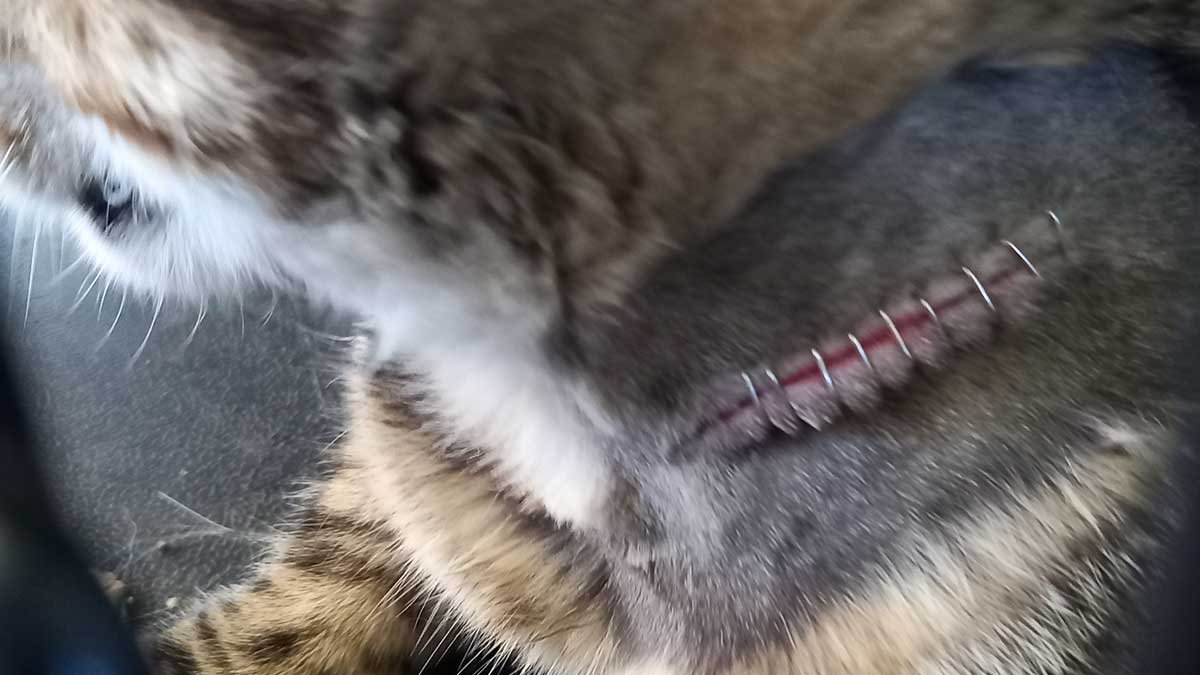 Sam came home with 9 shiny staples in his neck holding the wound closed. We were going to need to drive him back in 10 days to have them out again.

Our poor Samurai was quite drugged up when we got him home. We put him back in the crate for the night to let him sleep it off. By about 3am he was pretty awake. And noisy. And not happy. By day two, he was down to 8 staples, with a couple of them looking a bit tenuous. Because of the injury location, a cone of shame was not an option. The vet had advised we try taping a sock to his foot but even she knew that wasn’t going to work.

We taped a sock to his back foot in the evening, and it was lying sad on the floor by the next morning. But he also seems to have stopped pulling the staples out, so we took the win where we could.

We’re on Day 5 now, and he still has 8 staples. There’s a part of me that would like him to remove them all himself by Day 10 to avoid the return trip, but the longer he keeps them in, the better the wound will heal. So I’m hoping they stay.

Sam’s been getting extra visits and attention in the caravan. We stop in there to clean his litter box, feed him, medicate him, give him treats and Kat’s Nip, and to just say hello. He love bombs us whenever we visit. We have to be quick getting in and out, but so far he hasn’t escaped for freedom. So far, we’re all doing good.