Many years ago, when the idea of The Outpost was just starting to form in a strange corner of my brain, a friend of mine gave it a name: #chickenfarm.

I’m not a chicken farmer, and I never actually plan to be. But it became a shorthand for my dream of living on a slice of self-sufficient land. It turns out, I cannot imagine living on a farm in the country without having some chooks.

Three years ago, we had just moved onto a farm in a rental. We had some space, and the security to know we’d be staying a while. The landlord didn’t object to my having chooks on the condition we didn’t get roosters. I decided I was ready to take a solid step in my quest to #chickenfarm.

But one thing I really worried about back then was choosing a coop. There’s a lot to be said about what we don’t know. And like many things on my journey here, I knew nothing about keeping chickens. So I did my research and joined Facebook groups. I started to get a general idea of the needs and welfare considerations.

I concluded that one of the reasons most people don’t have chickens (aside from matters of space, tenure, and council rules) is because the set-up costs are quite astronomical. There seemed to be three options at the time: build my own, get something ‘cheap’ (and maybe a bit nasty) for a few hundred dollars, or go super-deluxe, and drop over $1000.

At the time, I didn’t have the ability to build my own. I had very few tools, and almost no building skills. When I looked into the cost of materials, they added up pretty quickly too, so it wasn’t necessarily going to be cheaper. I didn’t have a tow-bar on my (tiny) car to get anything like pallets, plywood, sheets of iron, or long planks home either.

If I were starting again today, this is the route I’d choose. But I have accumulated the knowledge, skills, tools, and building materials that would make it possible since then. Three years ago, it wasn’t a realistic option if we wanted chooks any time soon.

I looked around at the ‘cheaper’ options available in hardware stores and I didn’t like them. I didn’t feel like they’d last, or that they would hold enough chickens. They were still a few hundred dollars and it seemed like a decent chunk of change to spend on something that I was pretty sure I’d have to replace pretty quickly. Looking back, I don’t know if my logic made sense, but I’m still happy I didn’t make this choice.

Then I looked at the more expensive options. There’s a few. The ones at the higher end of the scale are made of plastic and metal, and can have things like self-opening doors. But they were very pricey, and they felt too lightweight for our windy piece of paddock. Plus, again, they didn’t hold many chickens.

I’ve since discovered that 3 chickens is the perfect number of chickens for a couple or small family. A small coop is perfectly sufficient for most people. It would have been totally sufficient for me! But, I didn’t know that at the time.

I hummed and haaed for a while, but in the end, I got a single bay house from Outpost Buildings. It could hold 12 chickens, and it came with a 10 year guarantee (on the roof, at least). I got it on special, with a free gift, so I got the best deal I could. Writing this blog made me curious so I went and looked up the invoice. I paid $1095 at the time – which compared to today’s price is actually a great deal.

They delivered it to the nearest Farmlands in Whangārei, and my Dad bought it out to us in Waipu on his trailer.

In putting together the coop, we acquired some new tools. It was quickly apparent my mum’s old electric drill wasn’t going to do the job. We made a late run to Bunnings one evening and purchased an impact driver and drill set, increasing the set-up cost of my chickens again. They’ve built many things since, and we still use them regularly now, but we needed them originally to build the coop.

It took us about a week to get the pieces together. Richard and I would build in the evenings, then I painted it using a can of cheap emporium paint during the day while he was at work. There were some minor fights. I kept wanting to edit the instructions (I always want to edit the instructions). But eventually we were standing in a complete chicken coop. 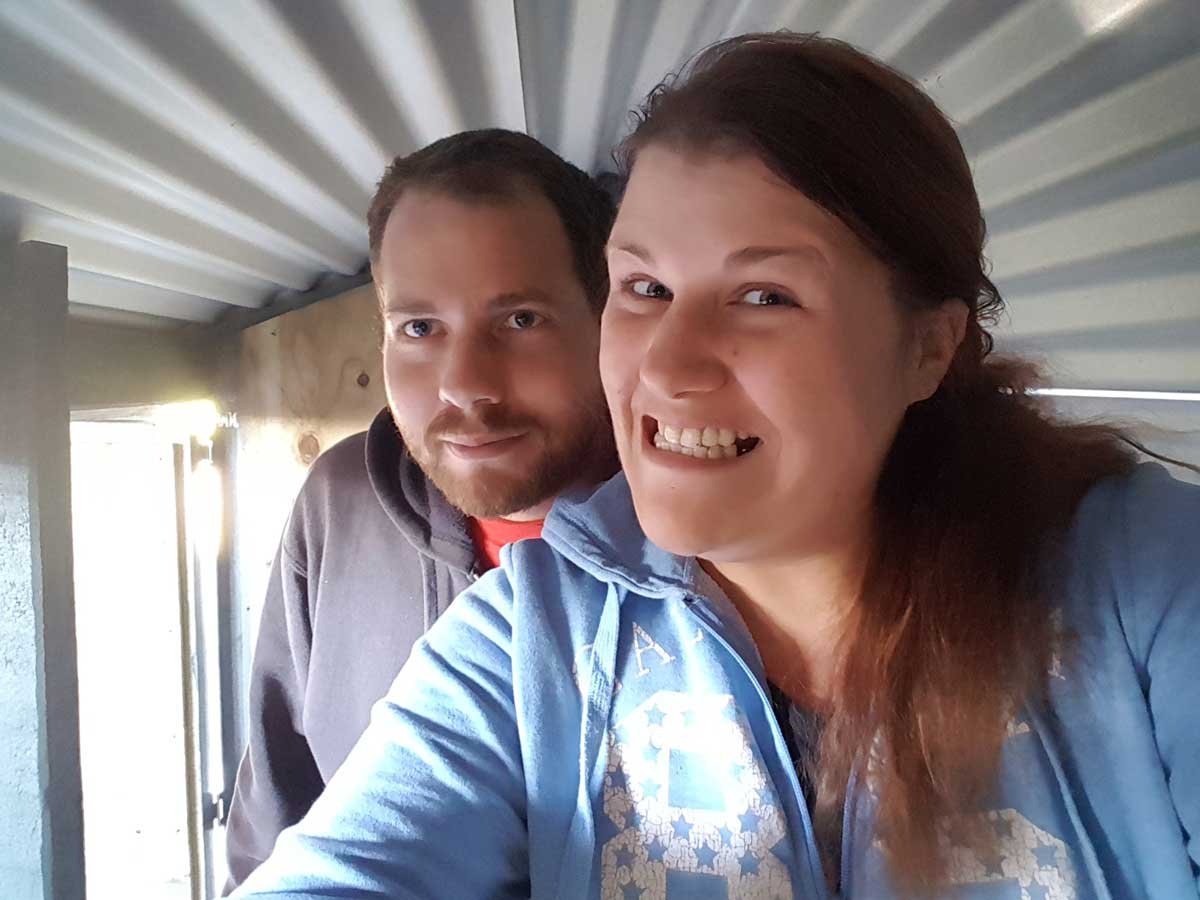 I drove half-way to Auckland to pick up the girls, and we moved our first 4 pullets in. They’ve been living and laying in it ever since. The girls on the day I picked them up Sam (as a kitten) inspecting the girls in their house not long after they arrived.

When we moved out of the rental and onto The Outpost, we gave it a brush off and it came in our container while the chooks rode with us. It was the first thing out, and we’ve moved it about the paddock a few times since. It’s really easy to tow around. Heavy, solid, but built to be towed and moved. Having recently adopted some new chickens, we decided it was time to give the old coop a good clean. Richard towed it up and waterblasted it. It had accumulated a few spider webs and piles of chicken poo. Moss had started to grow. It needed some attention.

It took about 150l of water, but we’d captured that in our barrels in the previous week’s rain, so that wasn’t a problem. After half an hour of hosing, it was practically brand-new again!

We don’t have any mite problems that I’m aware of, but I sprayed the coop with miticide anyway. Better to be safe than sorry. We replaced the bedding and it was all spiffy again. Hilary, Chlöe, and Souxsie (the new chickens) moved in last Monday night. 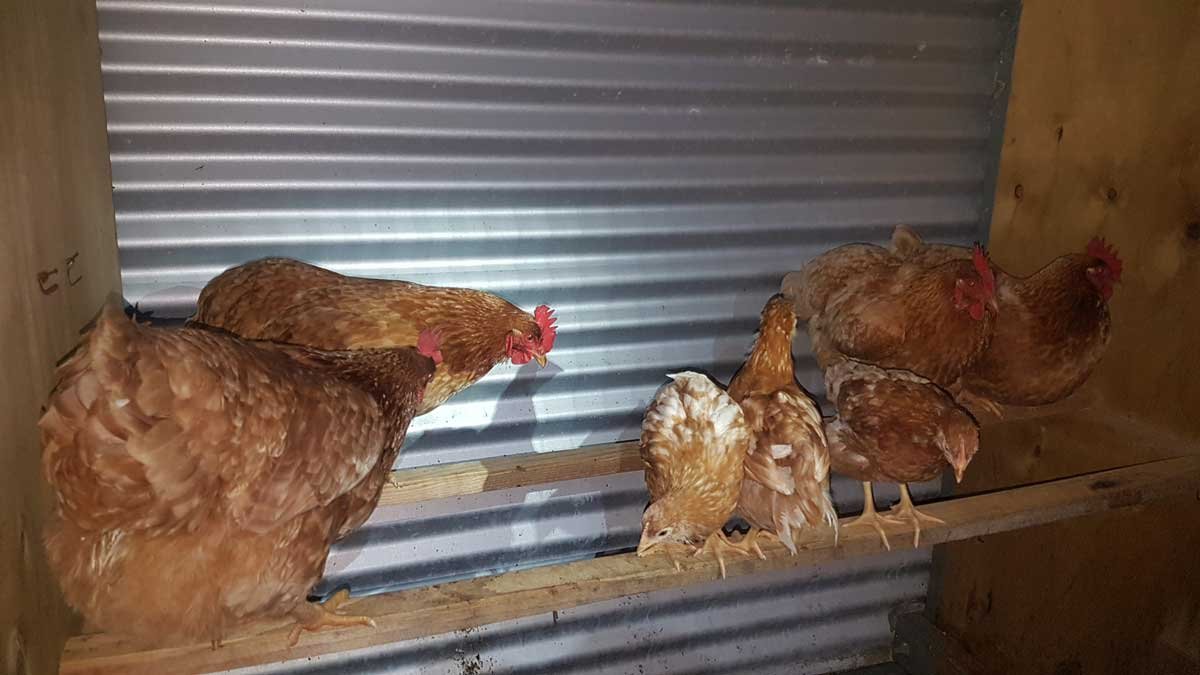 New chooks moving in with the old gals

After 3 years, I’m pretty happy I made the choice I did. Maybe with the skills and tools I’ve accumulated in the past 3 years, I would make a different choice today. But it still wouldn’t be as good. Past Kat did well with the information and circumstances she was presented with. The Outpost Buildings coop has proven it’s made to last. Aside from needing a lick of paint and some CRC, it’s still as good as it was on the day we built it.

This summer, I’ll find a sunny day and get out the paint tin again. I’ve still got that too. It won’t take long to give it a new coat, but it will ensure the coop stays in great condition and is home to many more chickens for years to come.