Well, my garlic is very, very rusty at this point. It’s spread throughout my four cropping beds, and this week has made its way into the main garden where the experimental crops are as well.

It’s heartbreaking, but it’s also not the end of the world. Because I am so keen to get these garlic out of the ground, I’ve been pulling up a head of each variety every couple of weeks to see where they are at. And it’s not all bad news.

I have four different varieties in these beds – three of which actually matter.

The ‘White Rocombole’ is supposed to be a 5-month crop (rather than the usual 6), so that’s the one I’ve been watching most closely.

It was planted on 15 May – meaning I should have expected to be harvesting it in mid-October. So I pulled one up on 20 October to see how it was doing. It had started to swell, but it looked like a leek on the inside. Absolutely no cloves. An Ajo Roja and White Rocombole plant I pulled up on 20 October 2021. Inside the Ajo Roja and White Rocombole I pulled.

The other variety pictured is ‘Ajo Roja’. I expect this variety to take longer, but again – no cloves.

This stage is what is known as “green garlic”. This year, I’ve developed a real love of this in my cooking. If you happen to pull up your garlic and you don’t have cloves – try slicing it up and using it in your cooking anyway. It’s quite delicious, and I think I might actually prefer it to garlic cloves!!

The variety I know as ‘White Rocombole’ turns out to be a ‘Turban’ variety of garlic. Amongst other things, it means it produces a scape – a flowerhead emerging from the center of the plant. I noticed the first few scapes emerging on 28 October. This week, I looked at them and thought they looked… yellower than the other varieties. They’re the bed closest to the camera in the photo at the top of the page if you want to see what I mean. I couldn’t resist the temptation to try a second pull. I specifically took out one of the first plants I noticed developing its scape.

The results this time were better. Because I was curious about the development, I pulled off each layer individually until I got to the center because I specifically wanted to check clove development. 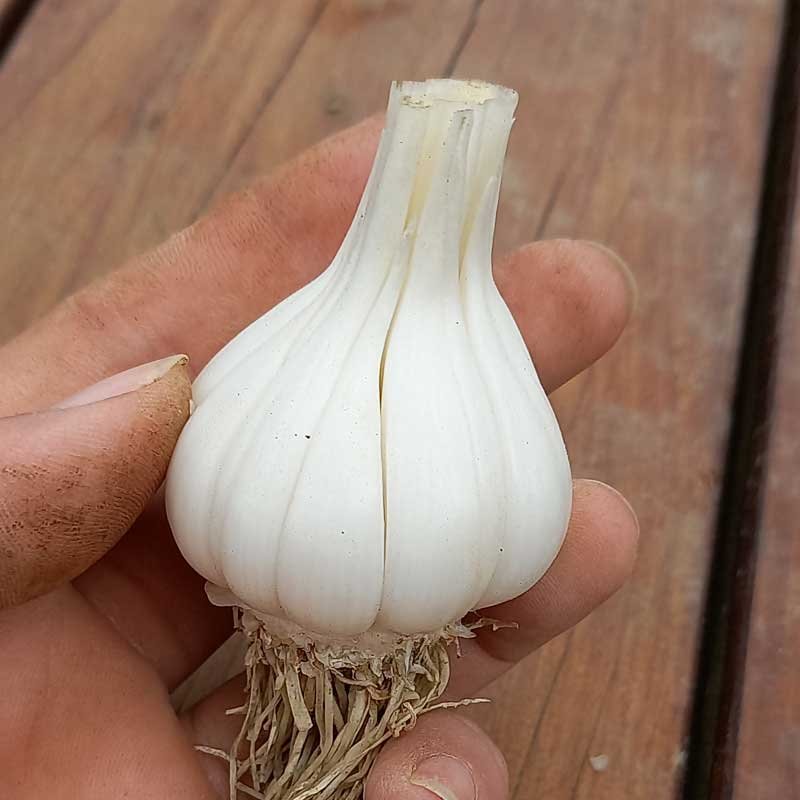 For the White Rocombole variety, the scape seems to appear in conjunction with clove development – which also seems to happen very fast.

It was about 3 weeks since the first pull, and we’d moved from no cloves, to a bulb I’m not ashamed of.

In some more good news, I discovered some tiny wee cloves developing on the Takahue.

This is an ‘artichoke’ type garlic, so there won’t be any scapes from this one. If you purchased garlic from me this year, you probably purchased Takahue. 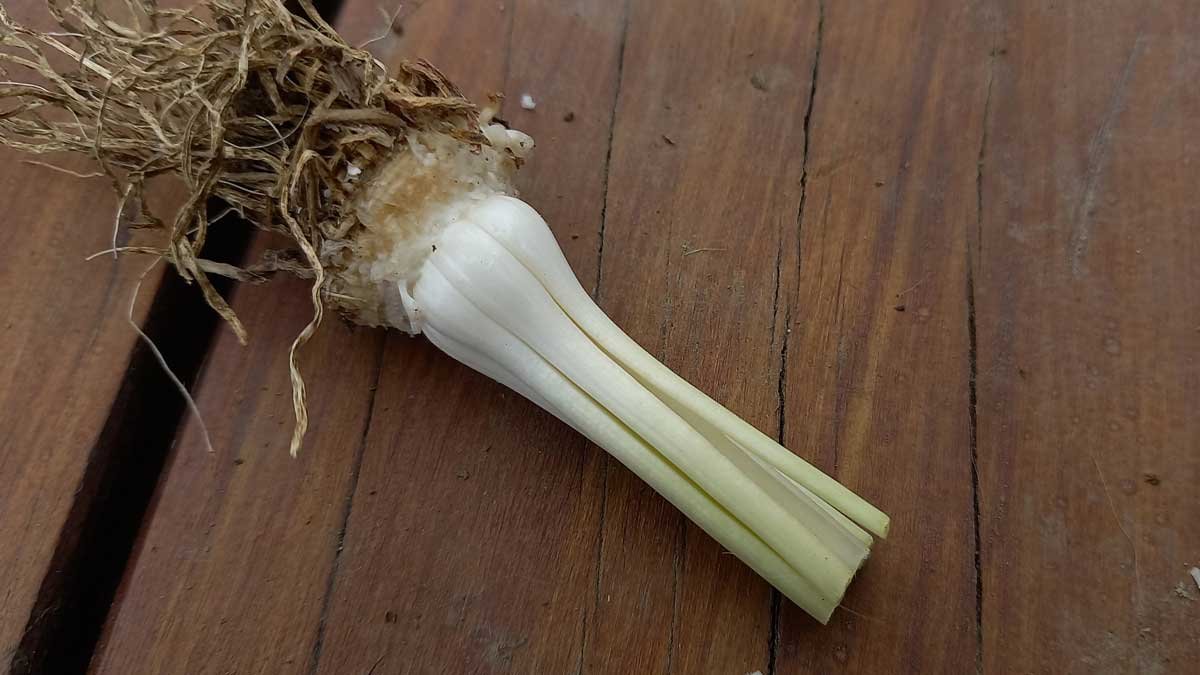 I mean, they’re really little, but they’re there. This bed was planted 12 May, and should take 6 months. Meaning they should actually be ready for harvest this week – but it seems everything is running a little behind schedule.

Still, as we see on the White Rocombole, it doesn’t actually take very long for cloves to develop. So I’ll try again in another couple of weeks.

Another 6-monther, planted 13 May. It should be ready by now – or at least close to. It was the last bed to succumb to the rust, so it’s had the best run.

But when I pulled back each layer, I found absolutely nothing on the inside. Like an extremely disappointing pass-the-parcel.

This variety may or may not produce scapes. So far it hasn’t. It’s lucky it’s very tasty as green garlic. 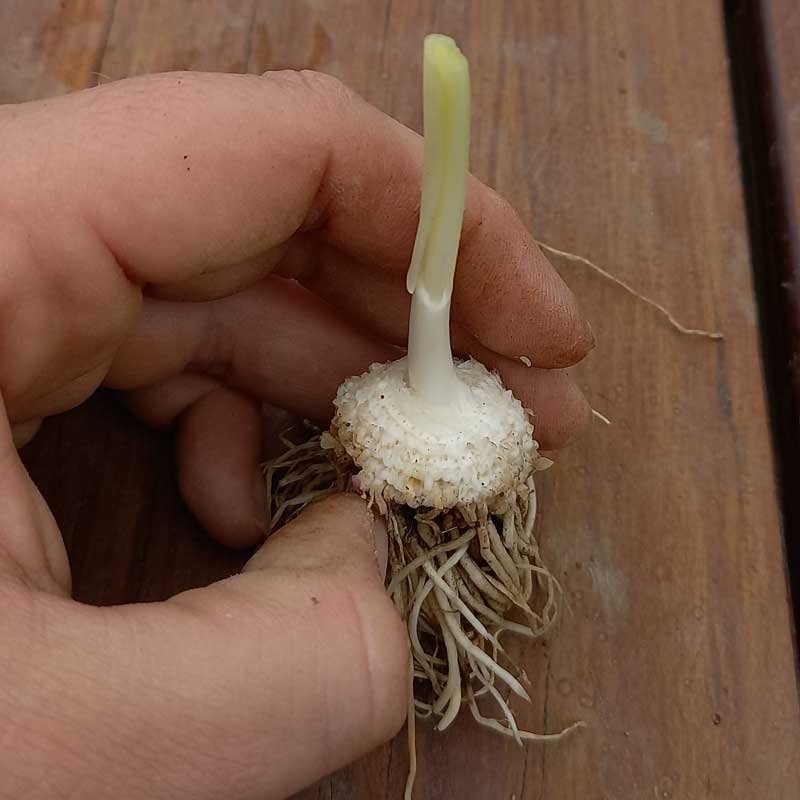 So what’s the plan, Stan?

On paper, everything is ready to come out of the cropping beds. There’s 4-6 weeks left on the ones in the main garden.

In reality, the growth is behind schedule. The rust has utterly taken over. And while I really want to pull these things up, I also want to give them the time they need so I can at least try again next year.

So, I’m looking at pulling up the White Rocomboles next week. It’s raining this weekend, but we’re expecting another sunny spell later on. That’s when I’ll get them up.

As for the rest, I’ll just keep tabs on them and wait for the right moment. I don’t know what my harvest will look like – and I’d be lying if I said this rust hasn’t got me a bit down. But I’ll definitely get something, and there’s always next season.