I haven’t talked about it much, but The Outpost has an orchard. Kind of. The truth is closer to we have 13 mostly-ignored apple trees, a nectarine, and an apricot tree.

12 of the apple trees were planted by the former residents. They’re a mixture of cider and eating apples. All heritage varieties sourced from a local supplier. We’ve added the nectarine, apricot, and a Braeburn apple tree since arriving. 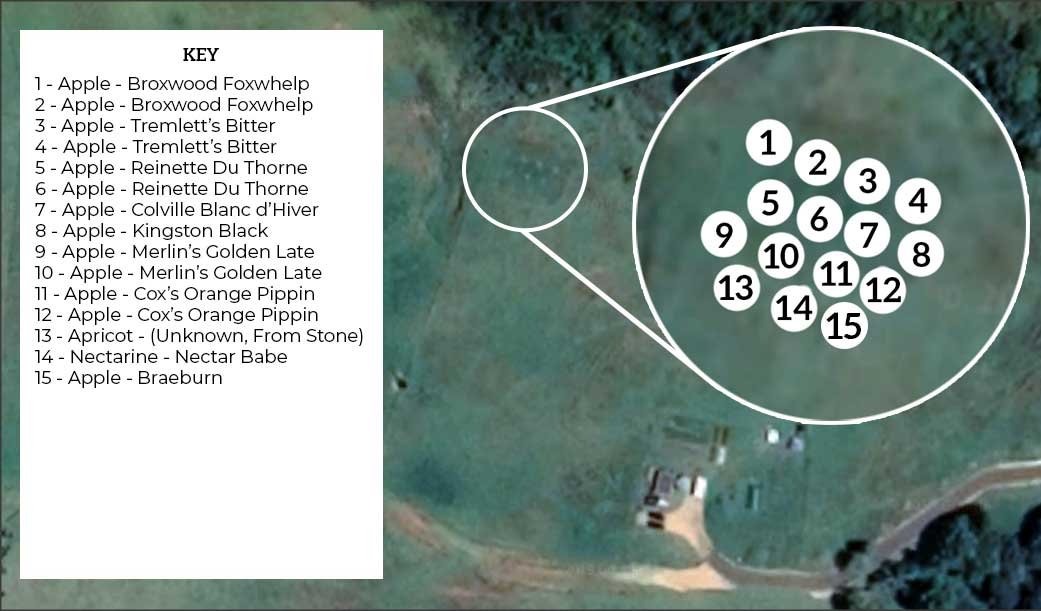 We haven’t been entirely negligent about it. I was really excited about the heritage trees when we arrived, but it was already very overgrown. We attempted to get control of the grass last Summer using a line trimmer – and even a scythe.

But overall it’s an exhausting task that requires going up and down a big hill lots of times. Our ‘to-do’ list grew, and the trees didn’t set any fruit. It just wasn’t a priority. 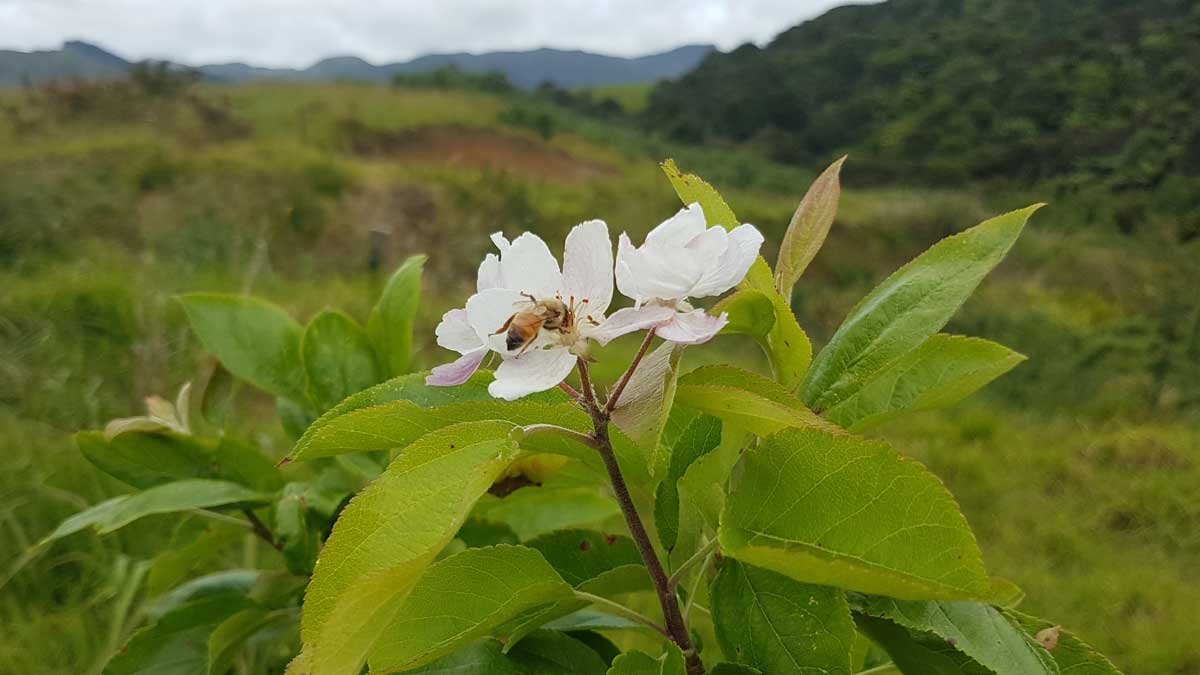 Then recently, I went for a walk down there. Some trees had fruit on them, others had blossoms. But the trees were clearly suffering. The grass was thick and long.

There’s stress and disease showing in the trees. The orchard moved up the ‘to-do’ list a little, but it was still going to mean a whole lot of work. Orchard before we began work

Not long after, I stumbled upon a TradeMe auction for a pallet of unused flat cardboard kiwifruit packing boxes at $1 reserve. Kerikeri has a lot of horticulture going on, and there were six pallets of an old design that had been sitting in a packing shed for too many years that needed moving along.

It so happens I’ve had a few conversations about this recently. If you lay wet cardboard (or newspaper) on very thickly, it can seriously hinder the growth of weeds and grass. It blocks out the light. Without light, many weeds and grasses will simply die. No need for herbicides, just a really thick layer of wet cardboard held down with grass clippings.

Over time, the cardboard breaks down. The carbon is simply returned to the earth. It retains moisture, improves the soil, and gives the trees a fighting chance against the grass. As an added bonus, a new neighbour has been giving us bags of horse manure lately. If I incorporated the manure into my plans, I’d be setting the trees up for some real success.

The dumbest of ideas

I talked it over with Richard. I was a bit scared that this was one of my well-meaning but ultimately flawed ‘good ideas’. He encouraged me to put a bid on it anyway. So I did. And when the auction closed, I had purchased 600 virgin kiwifruit packaging boxes for $1.

In the days between the auction closing and picking up the cardboard, I didn’t know if this was a wild scheme destined to go awry and leave me responsible for a giant pile of rotting cardboard, or if it was gardening genius. The gardening theory behind my plan was solid – it’s more my commitment to the task that was in question. I organised a day to pick it up and a trailer, and figured we’d find out soon enough.

Picking up and getting the pallet home wasn’t flawless, but it was successful. The first snag was when the trailer we arranged to borrow fell through the evening before we were due to pick it up. Not to worry, our local hire outlet had the plan back on track for the small fee of $22.

Once we found the place and I actually laid eyes on the pallets, my thoughts changed from “one pallet is way too much cardboard” to “I think we need two”. So we agreed I’d pay another dollar and take two pallets. Because this scheme was not already silly enough. 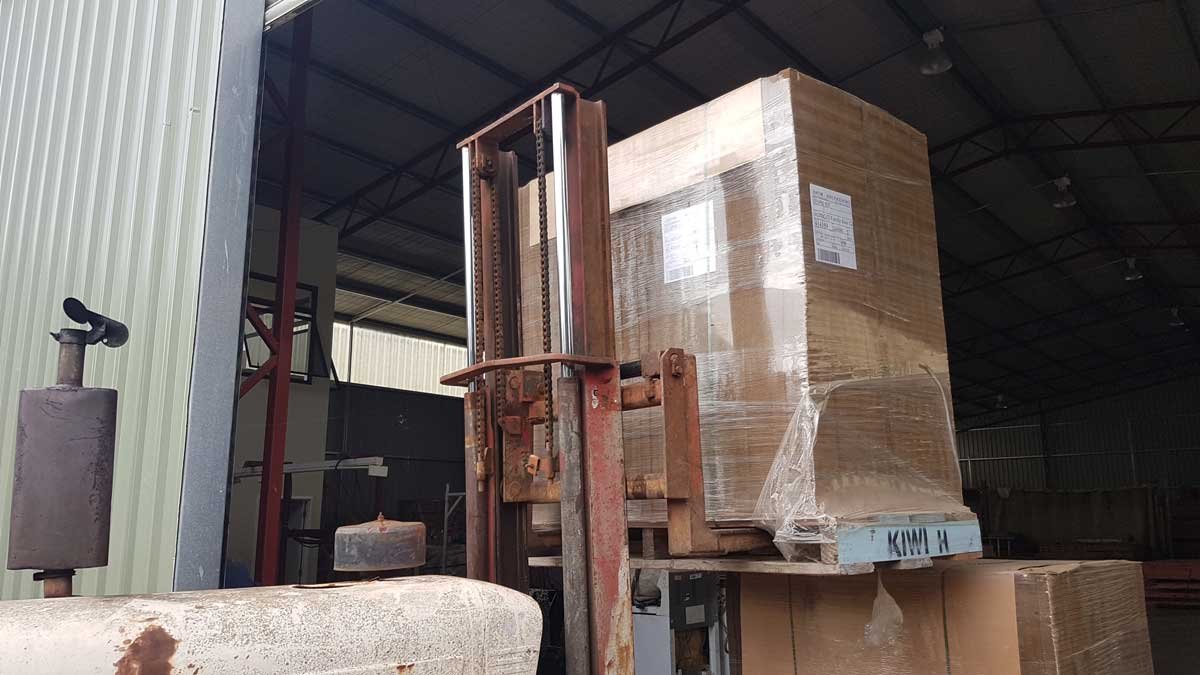 Loading on was simple. The seller had a forklift to get the pallets onto the trailer. But to be honest with you, I was way more worried about how we would get them off again.

I really thought I’d have to take off the plastic wrap and pull hundreds of boxes off individually. But an added bonus of hiring the trailer was it came with a tipping function. I wouldn’t say our unloading technique was perfect, but it did work. The pallets arrived at The Outpost. Now I actually had to do the job.

Having a plan, and all the materials, it was time to settle into the work.

I carted the lawnmower down and started mowing. It was incredibly hard work. Seeds and dry grass flew everywhere. The first mow was done without a catcher and all sorts of hard things kept flying into my legs. The mower kept stopping when the grass was too much (and all the grass is too much). Bugs bit the bejesus out of me as revenge for destroying their homes. My boots were stuffed with grass. Oh, and all of these trees are on some kind of incline, there’s basically no flat bit.

After more than an hour mowing, I had just cleared enough grass to start the main job. I had a quick break to get some water, food, and antihistamines into me before carting down the catcher, some hand tools, and 4 bags of horse manure by hand in a wheelbarrow. The first chunk of mowing done

Then I mowed the whole area again – this time with the catcher on. I needed to collect the grass mulch in order to mulch the trees.

Of course, as soon as I began this task, I ran out of petrol in the mower. So I walked back up the hill. This time I decided to come back down on the quad bike. I dropped 60 boxes into the nearest trough on the way down, refilled the lawnmower tank, and kept mowing. 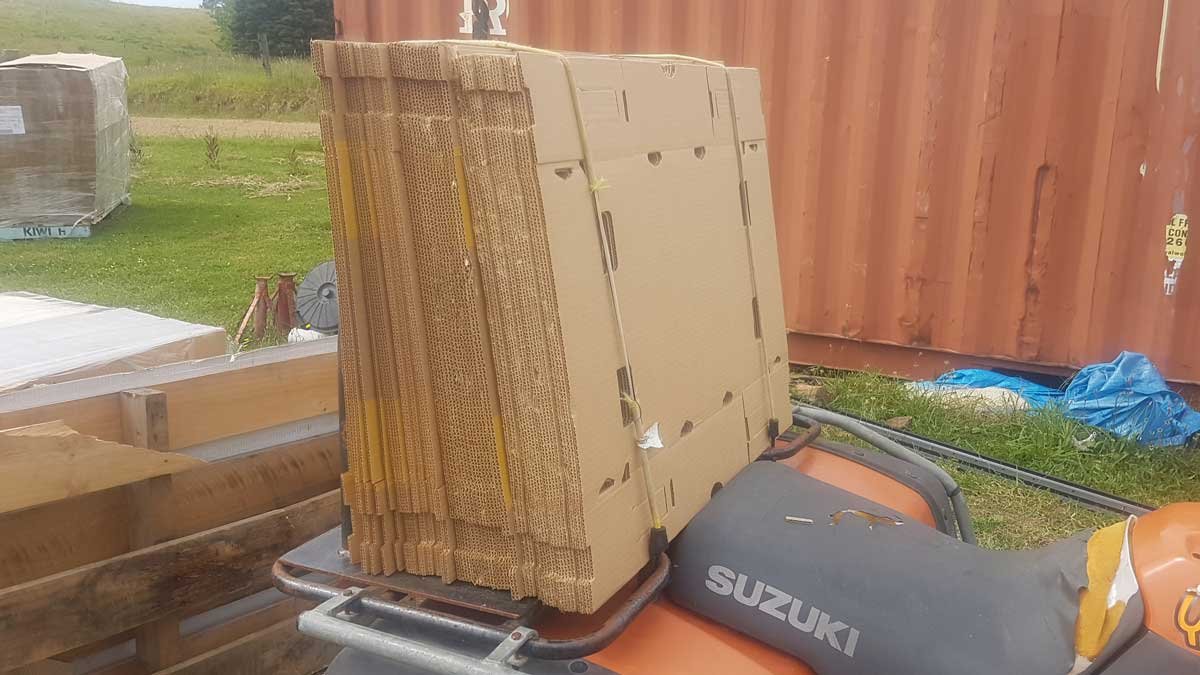 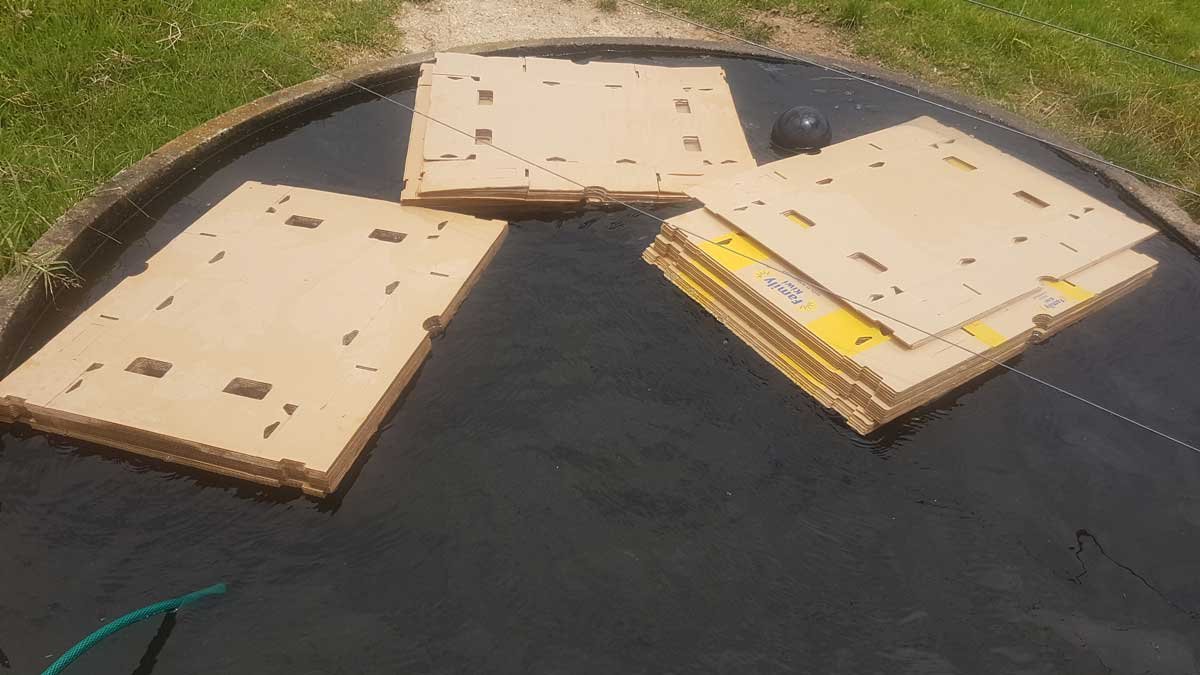 There’s a limit to how many times I can trudge up and down that hill, or push a lawnmower through the long grass. At a certain point, I knew I had to stop for the day. I was dizzy, tired, sweating, and covered head to toe in fine grass mulch. My body was reacting to all the grass. I was sneezing and itchy, my nose was runny, there was grass in my eyes. I was done. As much as I want this job completed, my body has limits and I had hit mine for the day. I filled the quad with the rest of the gas and drove back up the hill. Then, I loaded another 60 boxes onto the quad for the next day, and had the most glorious shower. I crashed into bed for a nap.

I had still not mulched a single tree.

That evening, I showed Richard what I’d done. He immediately started up the lawnmower, and had a crack at getting to the next tree on the line. He made a good dent, but he quit before he got to the tree.

That said, he was up-and-at-’em first thing the next morning. We made a huge dent in the grass and got two trees fully mulched before publishing – the nectarine and the Braeburn.

We were slowed down a bit by the time it takes to soak 60 boxes. The cardboard needs to be wet before it goes on or it will repel water, so if you’re going to try this, that bit is important.

We also made sure the cardboard, manure, and grass mulch were not sitting against the trunk of the tree. That could cause rot, and then we’d lose the tree. It does provide a place for the grass to grow up, but I’ll take care of that with a Niwashi during summer. The formula for each tree went: layer of doubled (wet) cardboard boxes, then 2 bags of horse manure, then the rest of that tree’s ‘share’ of the boxes, then grass mulch.

There’s still so much more grass left to cut. The worst thing is we’ve made the biggest dent in the area we have actually worked in before. The bit we’ve never touched is still to come and looks very, very scary.

If we can gain control over this area, and my mulching plan works, I’ll be looking to spend more time down there in the future. I need to set up a codling moth trap, get into pruning, and start an (organic) spray regime. I’m tempted to get a small shed to keep some tools and equipment in there. Progress at time of publishing

I’d also like to plant a herbal lei – a mixture of plants designed to repel pests, invite bees and beneficial insects, and hold the grass back. But it needs a pretty mammoth effort, which is made difficult by our physical limitations.

It’s very hard work right now. But in a year or two’s time, we’ll be seeing the literal fruits of our labours. It will be worth it then.