Doin’ it with stile I’m a pretty big girl, and practically every time I’ve visited a farm (before moving to one), I had some variation of this experience.

There’s usually a few of us walking through a paddock for some reason or other. We’re usually led by a ‘Farm Kid’. At some point, the Farm Kid decides they can’t be bothered walking to a gate, so they either jump the fence or just pop straight through it. The others follow. I am stranded on the other side in fear.

I’m afraid of the electric current. And very afraid of breaking their fence. I’m afraid of getting dirty, or tripping, or looking like a dick. I usually take the long way to the gate. Which makes me look like a dick anyway.

But sometimes when I visited farms, they had stiles. Easy ways to just pop over the fence without any danger of looking like a dick. I love stiles. They’re actually amazing. I’ve never met a stile I didn’t like.

So when we moved to The Outpost with all our hills and electric fences, I knew I’d want some stiles to help move around.

I tried explaining it to Richard and he kind of knew what I meant, but he didn’t seem as enthusiastic about the concept as I was. Maybe my relief in finding them on the farms I’ve visited has meant I have an inflated-sense of their importance? I don’t know, but I knew I wanted some.

I just hadn’t quite worked out where they should go, or how to go about building them.

This photo doesn’t do the hills justice, but the Path A shows the (approximate) route via the gate. We found ourselves ducking back out under the fence at the same spot a lot (the spot where this photo was taken) to take the Path B home. It’s roughly level with the compound and you can walk along the hillside with a smaller incline. It’s the shortest route between the areas we’re spending the most time in at the moment.

But by ‘ducking under’ the fence, I mean I literally lay flat on the ground and rolled under. It’s a technique I’ve got down to a fine art, but it becomes awkward when a cow has decided to take a dump right beside your spot (which seems to happen every single time).

I started Googling stiles. Well, I Googled a few other things before I learned they were called ‘stiles’. But eventually I came across this set of plans. It’s a simple design that uses a minimum amount of materials to cross a fence safely and comfortably. Reading through, I realised I already had all the tools and materials I needed. I just needed to decide to do it.

To me at least, our regular use of that spot was a pretty clear sign it was a good place to build a stile. I walked along the fence line and found a fencepost that was on a flattish spot with good clearance and no obvious rocks to dig up. I decided my stile was going to go there.

The first thing I needed was a post. We have quite a few we’d been given or found. They’d never quite been right for other projects, but they were perfect for this. I had to dig it out from quite an impressive pile of kikuyu. Then I dragged it over to my spot and dumped it.

The next morning, I decided it was the day. I headed out bright and early with a spade and dug a hole for my post. Then I compacted the soil back in around it, making sure the post was nice and straight. This turned out to be a bit of a mistake – the post I was going to be attaching it to was not straight. It turns out it’s more important to get the second post parallel to your original post. Still, it wasn’t a project-killer. I took my measurements and realised this would work better if the second fence wire was a few centimeters higher. After a false-start turning off the wrong fence (and finding out about it the hard way), I got to work. The nails needed a bit of convincing to come out, but I raised the wire about 5cm in the end. I also insulated the wires with some electrical tape.

I dragged my tools home and went to the shed to construct the step.

This is where I began taking inspiration from the plans, rather than following them perfectly. If I followed them perfectly, nothing would have fit. The measurements should be determined by your materials and situation.

The main components of the stile are the bearer; two bearer arms; the step; and a brace. 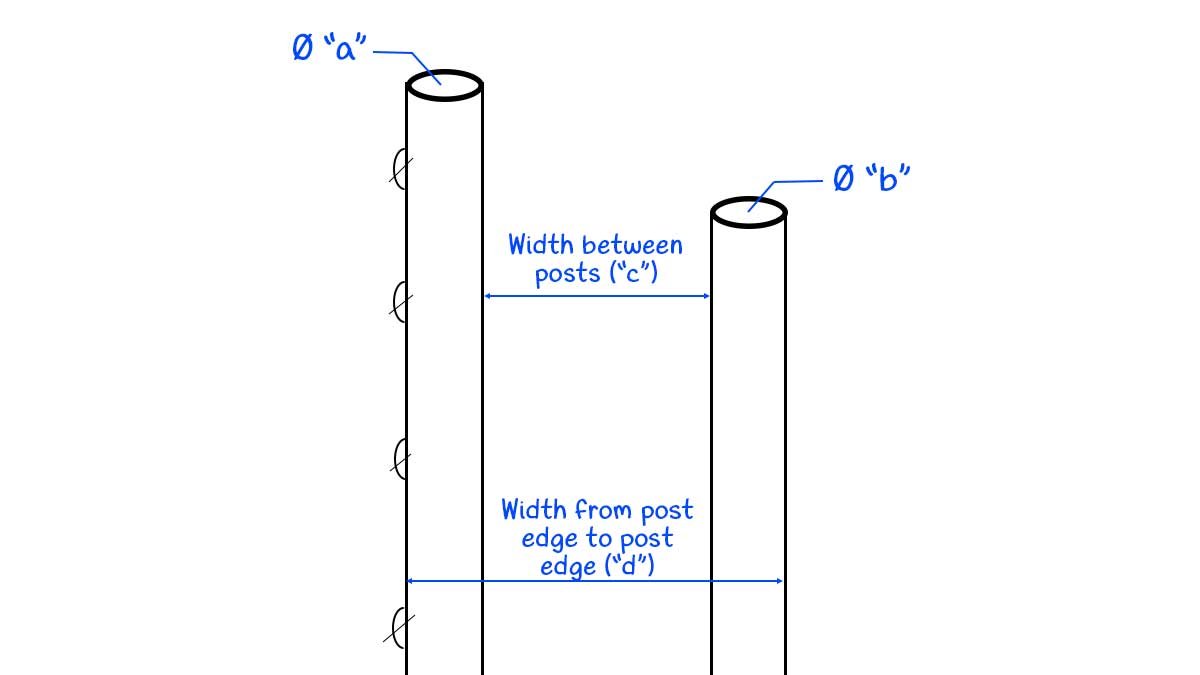 Having done the math and measurements, I cleared some space to work in the shed and pulled out the power tools. I forgot how much fun this bit is. Sawdust was flying for a while there.

I found some good solid pieces of wood under the cabin which I think came from building our deck. I measured everything up and cut it to size. Then I sanded them to something acceptable, but not too flash.

I wish I’d got some photos here, but I was too excited to build my stile. It won’t be my last stile, so if you’re interested in more detail here, let me know in comments and I’ll work on an update in the future.

Next, I pre-built the bearer by attaching the bearer arms. This was a bit of a gamble because if my measurements were off, it would mean some deconstruction – but when we got there it fit like a glove, so it paid off.

Out in the field

I asked Richard for a hand for the install. The bits were heavy and getting them level required a second set of arms.

We used the spirit level as a spacer between the bearer and the wire. It was about a centimeter taller than the step was thick, so as long as the level fit, the step would as well.

We used galvanised screws rather than nails – mostly because we had the screws and the equipment to install them. With wood this thick (4.5cm), it was easier than bashing a hammer. We pre-drilled our holes, attaching both the bearer, and the bearer arms to the post.

Next was the step. That’s attached to the bearer arms. This is the place where getting my posts parallel would have been helpful. One of the bearer arms overshoots the step a little because of the unevenness. Ah well, lesson for next time.

It's a bit creaky, but it works!! pic.twitter.com/ssRIfl7vGt

Once all that was done, we had a functional stile. We could get across the fence. It was time for a nap.

After dinner that night, I worked on shaping up the brace. Functionally, this adds some stability to the structure, but it’s also an extra place to put your hands as you get across, and a pretty handy spot to put whatever you might be holding. I sanded this quite well to make it smooth as I know I’m gonna be holding it for support a fair bit.

I didn’t bother to curve out the area where the brace met the post per the instructions. Instead I went for a finer pointed shape. I pre-drilled the angled hole before I left to install it, so I knew that was done properly.

A Facebook comment led me to taking down a length of alkathene pipe to slot over the top wire at the same time. It’s an extra bit of insurance against zaps to the knees.

I finished up at dusk, lit by a headlamp. Our first completed stile. 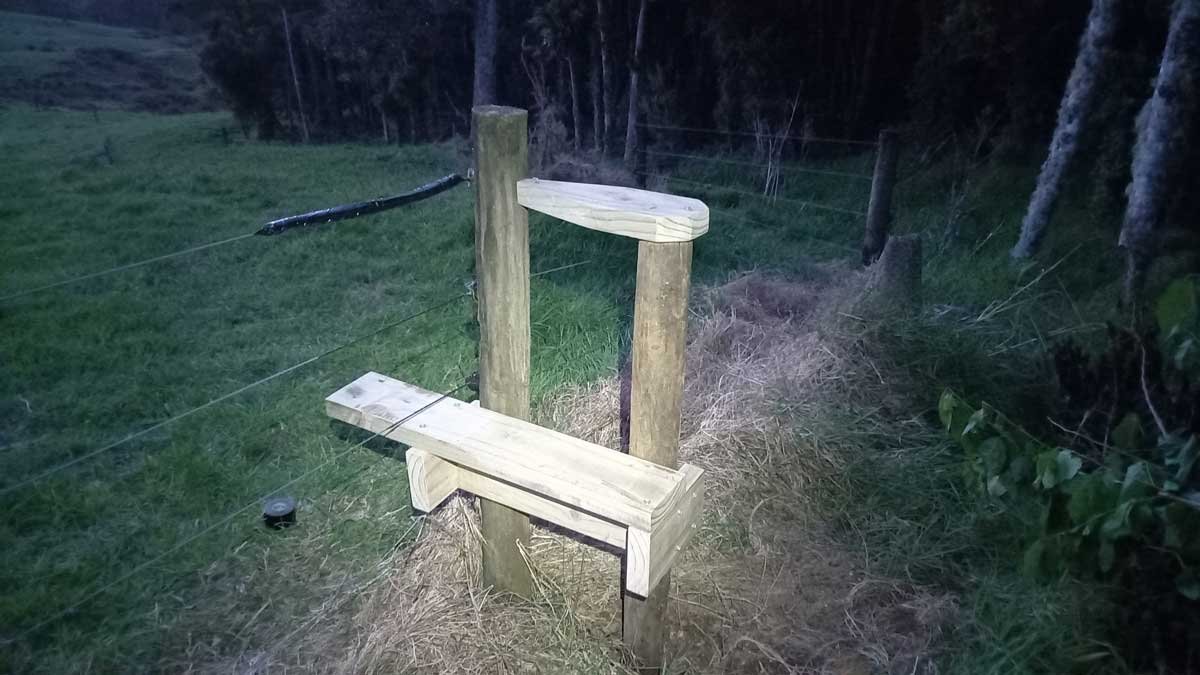 There is no way this is the last stile I build. I can think of another 2 areas where they’d really improve access without much effort. They’d enable us to take on projects that have been bugging me for ages, but where access has been the barrier.

We have half a dozen posts I can keep digging up. There’s still heaps of materials around. We’re lucky enough to have collected all the tools we need. My first stile basically took a day to put together. I expect I’ll get faster with a bit of practice. Building more than one at a time would speed things up as well.

I’ve learned a few lessons on this one, but overall I’m really happy with how it’s turned out. It’s cheaper and easier than installing a gate, but massively improves our mobility on the farm. As we turn our attentions to different problems, at least I know how to build the first step to a solution now.