The truth is, 24 hours ago, I didn’t have much of a blog for you this week. It just hadn’t happened. I’d been so busy submitting assignments for my course and building new compost bins that I’d written absolutely nothing so far.

Sometimes that happens. I try not to stress about it because I haven’t missed a Sunday yet. But this week I definitely cut it close.

Yesterday was a beautiful day. Bright blue skies with minimal wind. We did some washing in the morning, then faffed around a bit. Richard made a banana loaf. I came up with a genius plan to sort our retirement years (as you do). And we got engaged.

In the afternoon, Richard suggested we go out to our bush pond. It’s been a while since we’ve been out there together. We locked up the house and wandered up the hill to our bush block.

It’s truly amazing how nature isn’t a dusty museum – it is constantly changing. We walked around the pond – marveling at how clear the water was, and how much it had risen.

We spotted giant nikau and puriri that had been toppled and damaged in the recent storms. I wondered how we might haul that felled puriri log out of the bush and around to our garden to use it. There were seedlings like kawakawa and titoki sprouting up amongst the undergrowth, and I tried my best not to stomp their growth potential with my big boots as we made our way around.

There is a spot where I’d like to build a seat overlooking the pond one day. I was looking out toward the pond and Richard was behind me. He asked me to turn around. When I did, he was down on one knee, holding out my great-grandmother’s ring, asking me to marry him.

Reader, of course I said yes.

It was both a surprise, and not a surprise. Like many couples, we’ve talked about marriage in the past. And he had been dropping very strong hints all week. But did I know that’s why we were going for a walk out to the pond on a beautiful Saturday afternoon? Nope. No clue.

And yes, it was my great-grandmother’s ring. At least, I’m pretty sure it is. It was one of the things I’d inherited over the last few years, and came to me from my grandmother’s jewelry collection. I’ve asked a few questions over the years and it’s generally believed to have been my Nanny Retta’s. She died when I was young, but I vaguely remember her, and her husband. I’m told he grew excellent potatoes. 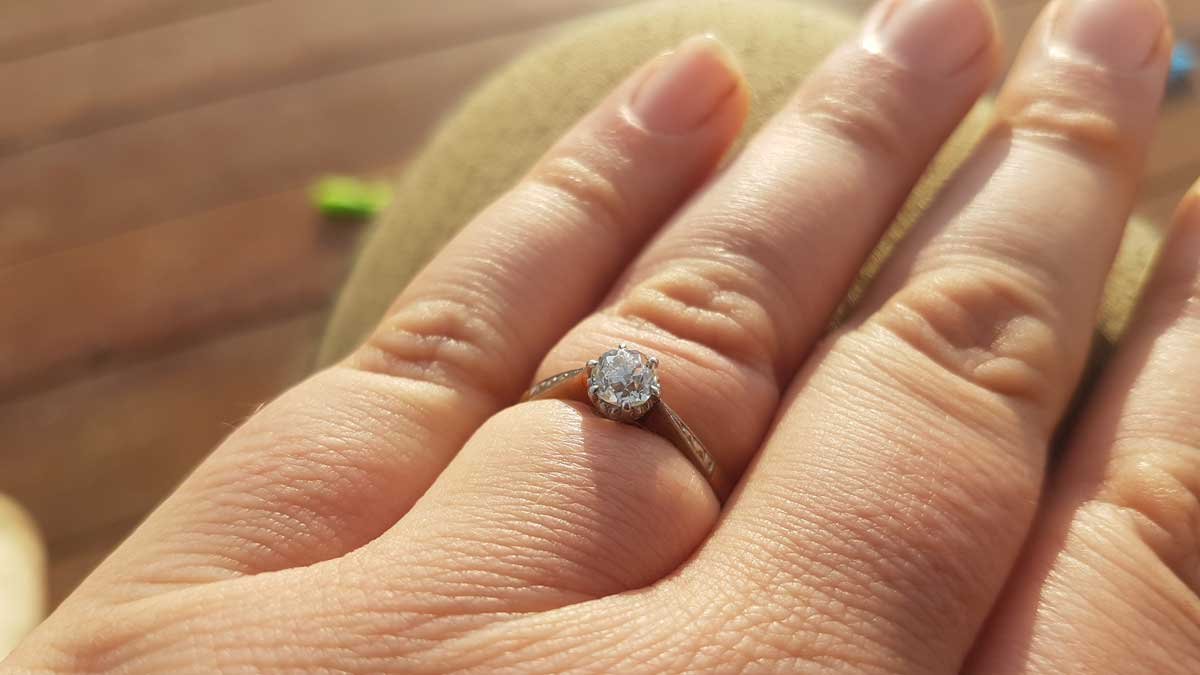 Truthfully, my preference has always been for antique jewelry. I’ve always loved it more than options manufactured in my lifetime. Ever since I first saw it, it’s been the only ring I really wanted. When I had it valued, I knew something this special could only really be used for one thing. I’ve often joked about the fact I come with my own engagement ring. Why buy another, when the one I really want has already been given to me?

It needs to be re-sized, and Richard is going to buy me a chain at the same time. The chain is for when I am gardening or hauling around cow manure – the very precious ring can hang around my neck. I’ve already lost one family ring in the garden somewhere (a cheap one of mum’s). This one will not suffer the same fate.

Of course, every life event over the last few years feels a little less shiny because I can’t share them with my mother. There was a moment on the night she passed when I realised she wouldn’t be here when I got married, or finally purchased a lifestyle block. That was the moment I realised what her death meant. Not having her here for this stuff makes the really joyful stuff actually hurt a little bit. There is a space here at the property that her truck should be parked in, and it’s hard not to wish she was here for this.

It’s pretty safe to say this is the main reason we chose to notify everyone via Facebook. I’m sorry if you didn’t get a phone call – no-one did, because I couldn’t call her first.

I’m super-happy to have taken this step with Richard – and I guess we have a wedding of some kind to actually think about now. Fair warning: we might just elope in a courthouse ceremony. But we may also have a very small event (<20 people kind of small) here. That’s all to-be-decided. No date is set.

If it’s here, it’ll be a while away yet. My oldest friend (a trained florist), has offered to do flowers – which I’ll need to grow first. We’d also need to select an actual location (there is 30 acres of options) and tidy it up. No matter where we choose on this property, there’s going to be a lot to do.

But he asked me the question, and I said yes. We’ve been together 4 years so far, and we’ve been through a lot in that time, so we can wait a little longer for the right moment.