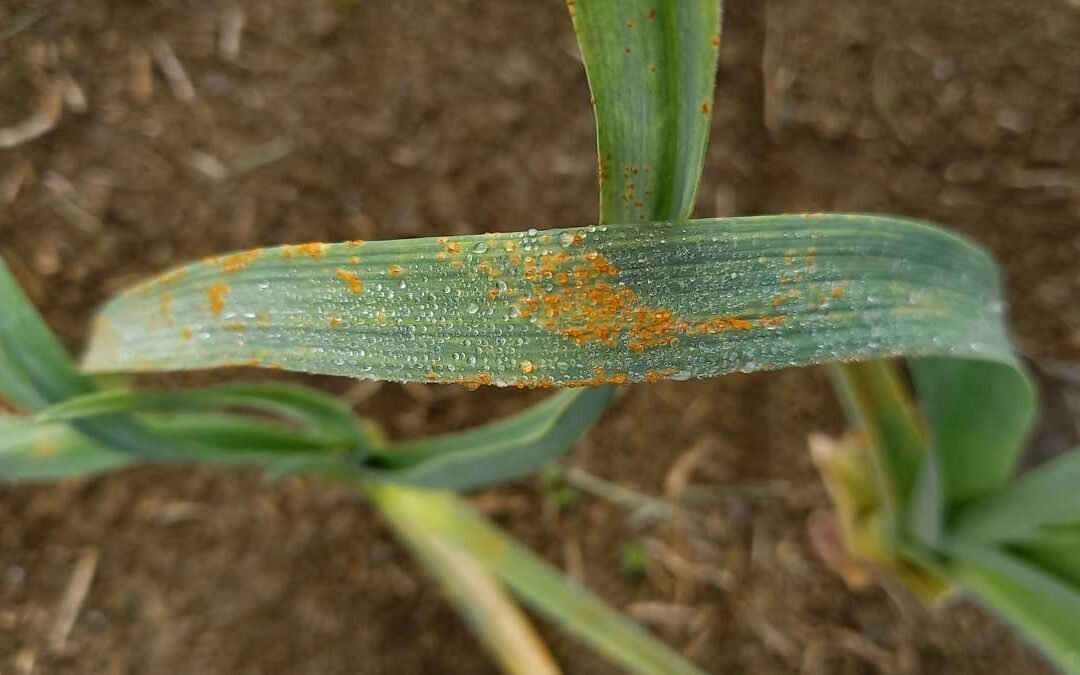 Argh. The garlic crop has rust.

So far, it’s mainly confined to one the main garlic cropping beds. But it’s not good in there. Looking at it turns my brain into scrambled eggs. I just stand there, overwhelmed. I’ve got close to 1000 garlic plants in those beds. It’s… a lot.

I’ve gone back and re-read a whole lot of information on rust. It’s quite nice in that it informs me this is probably not the end. It ain’t good – but it’s not the end.

The rust will affect the size of my garlic bulbs and the vigour of the plant, but it’s effectively a parasite – it can only thrive on a live host plant. It prefers to suck the life out of my garlic without killing it.

It’s not going to kill my crop, but it will spread if I don’t intervene. And it will make a difference to the quality of my crop – a crop which I’m planning to sell a large portion of. So it’s pretty heartbreaking and right now as much as I love growing garlic, I bloody hate growing garlic.

Why I got rust

Comparatively, this month has been wetter than previous Septembers. We always have high humidity. It’s basically perfect conditions.

Other gardeners nearby have also had rust for the first time this season. It’s not something we introduced, or even something we did – I think it’s something that has just happened this year. The good news for me is studies done by the University of California show that seed garlic that was grown with rust won’t pass rust on to further generations. I’ve also found that in practice. I had rust for Year 1 of the Takahue and Ajo Roja lines, and then two years growing those same lines on without it.

What can I do?

In terms of sprays, the options are lime sulphur, sulphur, or copper oxycholoride. They are all preventatives.

My research found one cure for rust – an antifungal called Folicur that’s normally applied to grain crops. I took one look at the Safety Data Sheet and that was the end of that idea. The notes include “may cause damage to organs through prolonged or repeated exposure“, and “very toxic to aquatic life with long lasting effects“. I’m not putting it on food. I’m not selling that to my friends.

A ‘mechanical’ method of control is to cut all the rust off – give them a drastic haircut. The leaves need to be handled carefully and dumped at green waste, and equipment and clothing both need regular sanitising. The trade-off here is that fewer leaves mean less photosynthesis, and smaller bulbs. I’ve read that losing one leaf can reduce the bulb size by 13%.

One thing I got right was my spacing. Rust can spread on the wind, but the spread is so much faster where the leaves touch. Thankfully in my beds they don’t touch too much because they’re spaced at 20cm apart in rows 30cm apart. But they do touch, so cutting is also reducing that.

And from there… let’s all cross our fingers and send those little garlics some good vibes. A hope and a prayer is about all we have.

The problem bed is a mixed bed. In terms of my economic return, it’s not actually massively significant. At least half of it wasn’t for sale next year anyway. It contains all my “Mongolian Red”, a decent amount of Takahue, and a bit of Ajo Roja that I used to round out the ends (because it looks very different to the other two and can be easily told apart).

It was the last bed planted – over the 19th and 20th of May. That means they still have two months of growing to do (at least in theory). We’re at the most critical stage when bulb growth begins. I’ve pulled up some of the worst-affected plants – I’d rather sacrifice 2-3% of the crop to give the other 97-98% a better chance. I also wanted to see how they’re doing. The bulbs are juuuuust starting to fatten.

The Takahue next door to the problem bed seems to be going down next. The rust is there, but it’s not as bad. It was planted a bit earlier on May 12, and it’s a 6-monther so there’s closer to 6 weeks left. It’s also had better soil management and the stems are much thicker.

The White Rocombole has a few spots. This bed was planted 15 May, and should be ready faster – in 5 months. That means at least in theory, there’s only 4 weeks left. The stems are fat and I’ve got a lot of hope for this one.

The first signs of infection are just beginning on the Ajo Roja. I’ve also noted this variety was a little more resistant the last time I faced rust in Waipu in 2018. It was planted May 13, and takes 6 months. Meaning there’s about 6 weeks left on them as well.

Nearby, but somewhat sheltered from the garlic cropping beds is the main vege garden. I’ve got a bed and a half of garlic here that is still unaffected at this stage. It’s very important I practice hygiene between the two beds to prevent being the vector that spreads the disease.

Everything in the garden was planted later – in June and July. I’m not expecting them out until December-January. There’s a lot longer to go with these ones. If they were to show signs of rust, they would really be hit.

A course of action I’ve cut off some leaves, but it might be time to call a halt to that practice and just try to stay on top of spraying. My gut says this is the better option, even if all the blogs I’ve read disagree.

At least in theory, we should be pulling the crop for curing over the next couple of months. Cutting off every piece of rust from 1000 plants is possibly best described as a Sisyphean task at best.

In anywhere as soon as 4 weeks, and as late as 3 months from now, we’ll be pulling these suckers up, and the incredible anxiety they give me each season will be over. I’ll know what they did and what we can carry on to next season.

There’ll be another big pile of work to clean them up and dry them, then I’ll be able to see if all the weeding, tending, and stressing has been worth it.

Then these beds will be retired from growing garlic for a while. The plan as it stands is to use these beds for catnip over the next 2-3 years, adding about 100 catnip plants to my catnip empire. I’ll spend that time applying composts and mulches to continue to improve the soils. Eventually the rotation will bring it back, but I’m hoping this will be the last year we see rust at The Outpost.