In the middle of winter, the idea of fresh, juicy strawberries might get your mouth watering.

Here in New Zealand, we associate strawberries with Christmas. That’s because the main fruiting season runs from late September to early January.

That means now (May-August) is the time to get your strawberries planted. They’ll establish over winter and be ready to bear fruit as soon as the soil warms and the days get a bit longer.

Strawberries can be grown in pots, raised beds, and garden beds. Pots and raised beds are best because their soil warms faster in the spring. Make sure your patch gets as much sun as possible throughout the day.

Make sure the soil contains lots of organic matter. Manure is best, but compost is great too.

One of my favourite manure sources is Zoo Doo – it’s available if your city has a zoo, profits go to Working to Prevent Suicide, and they deliver! Sheep pellets and chicken manure compost are also available in stores and will do the job as well. There’s a few helpful tips when it comes to planting strawberries. The first is plant on a hill. Strawberries don’t like their feet getting wet, and their roots are pretty shallow, so planting on a hill means better drainage. Unlike most plants, I don’t dig a hole in the soil to plant it. Instead, I place the plant on the soil’s surface and scrape the soil from around the plant onto the roots. This forms a hill which helps keep your berries protected.

The second tip is don’t bury the crown. This is the bit the leaves (and flowers) come out of. If you bury it, you risk diseases and you’ll be making it hard to send out new flowers – thereby reducing your crop.

Next, give them space. At least 20cm, but 30cm is better. While the plants you put in your garden now are small, they’ll be huge by the end of summer.

Finally, mulch with straw or a sheet of plastic. Keeping your berries off the soil stops them from rotting before they’re ripe. 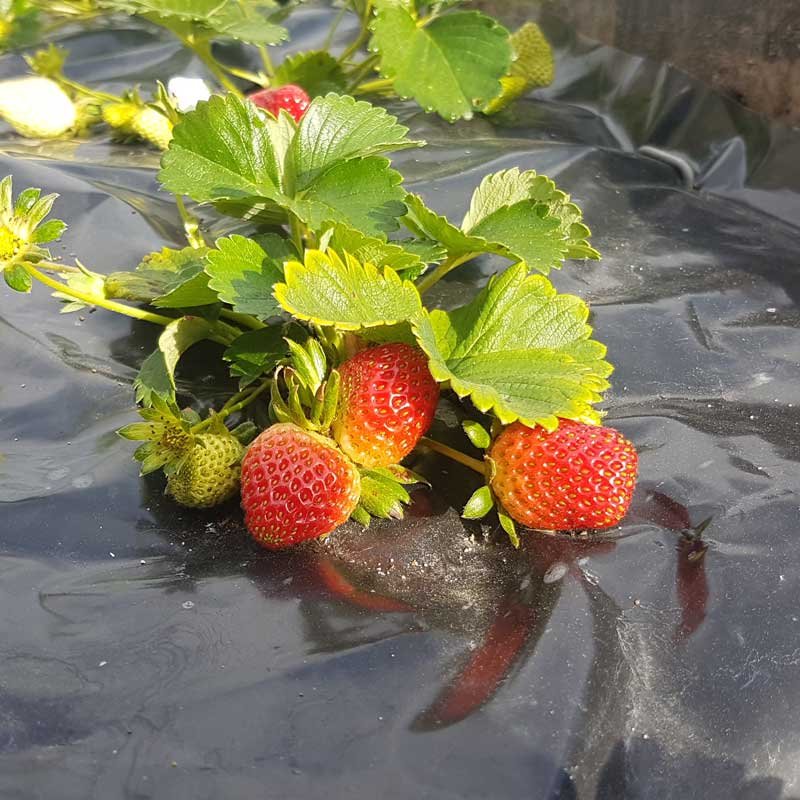 I worked with plastic last year and I won’t be doing it again, but it is cheap, easy to source, and it does work. You do need to be careful watering though. Personally, I think they’re called strawberries for a reason. Straw can be found in petstores, on TradeMe, and in garden centers.

The biggest pest for strawberries is birds. We found having 3 cats helped with that, but it pays to cover them with bird netting after they begin flowering.

The next biggest pest is slugs. You’ve got 2 choices here. The easiest one is to use slug bait once the fruit begin to ripen. The more intensive version is to head out with a torch and collect slugs and snails in a jar of soapy water at night.

Finally, if hail is predicted in spring, cover your plants with a towel. We had a massive setback to our very productive crop last year when they got hit with 10 minutes of hard hail in November. All the fruit was bruised and the leaves were torn to pieces.

Berries which are starting to ripen outside can be bought inside to finish ripening. That way the bugs and birds definitely won’t get them! Just leave them on the bench, refrigeration slows the ripening process down.

It’s possible to get a second smaller harvest in autumn if you clip back the plants in January, and remove the runners as they appear.

The berries in the second harvest often taste a bit different, but they’re a nice treat as the cold starts to come along. To help keep them sweeter, make sure you fertilise with worm juice or a liquid seaweed fertiliser once a fortnight.

As I’m writing this blog, I still have a few strawberry runners for sale in the store. These are baby plants sent out by the parent plants during summer and autumn.

If you allow them to grow, the runners can be dug up in late autumn and winter when they’ve got roots. Then you can give them away, sell them, or replant them to extend your own patch for next year. Want to know when something's on sale, or a blog goes live? Sign up to the mailing list and be the first to hear about it!

Buy me a coffee