I love growing garlic. Everything about it: learning, digging, worrying about whether you have totally failed, harvesting (because you didn’t), storing, and – of course – eating it. This year is my fourth garlic season, and I’m very excited about it. My garlic-growing journey has been an evolution of learning and ultimately, passion.

The first time I grew garlic, I failed miserably. They never fattened up and looked like sad spring onions when I ‘harvested’ them. The second time, I was so successful I won an award for it at the Paparoa A&P Show. The third time was kind of in the middle – not perfect, but pretty good.

After my failed first season, I did a lot of research on garlic growing. I identified a few problems with what I had done, but I wondered if maybe the variety I was growing was a significant contributor.

You see, all my research led me to realise there are two main types of garlic – hard necked and soft necked – and then dozens of varieties of each type. But only one (a soft necked variety named ‘Printanor’) seemed to be widely available in retail stores. There’s Elephant Garlic too, but technically that’s a leek, and I’m not counting it today.

Garlic typically likes a good frost to break dormancy, and I live in Northland and maybe see a light frost once a year. So I wondered if maybe Printanor grew fine in other regions, but rubbish here.

So, in Year 2, I sourced another two varieties from growers on TradeMe. I got my hands on a hard necked variety called Aja Rojo, and a soft necked variety named Takahue. Takahue was bought to Northland by early settlers, and is named after the place they lived. Garlic can adapt over time to suit a particular area, so I figured it would be well-suited for our place in Waipu.

I ran a trial of my new varieties alongside the Printanor that year. I prepared two beds thoroughly with compost, manure, and lime. Then in each bed, planted a mix of varieties.

I found that Printanor didn’t do anywhere near as well as Aja Rojo or Takahue when grown under the same conditions. It wasn’t even a close race! The Printanor grew bulbs that year, but they were more susceptible to rust; more likely to be damaged during harvest; and they just weren’t as big. 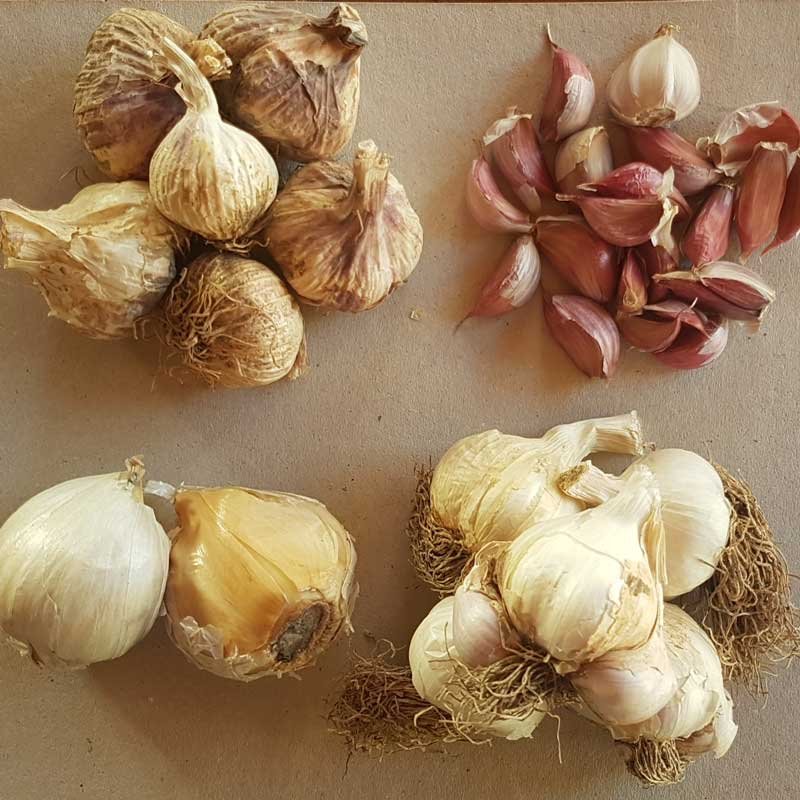 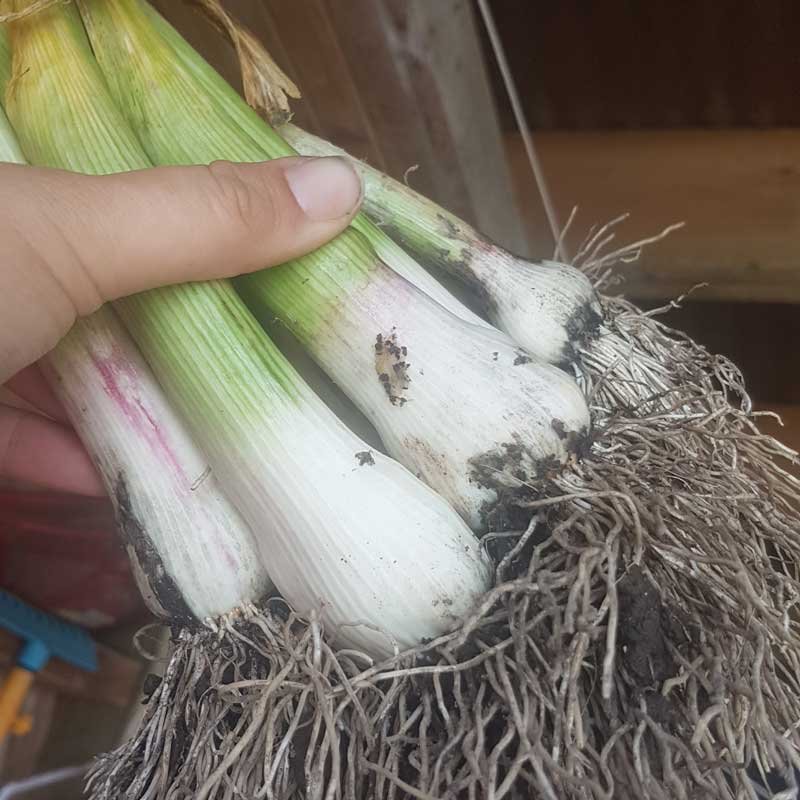 Damaged Printanor – a few bulbs were split like this, making them less ideal for storage. 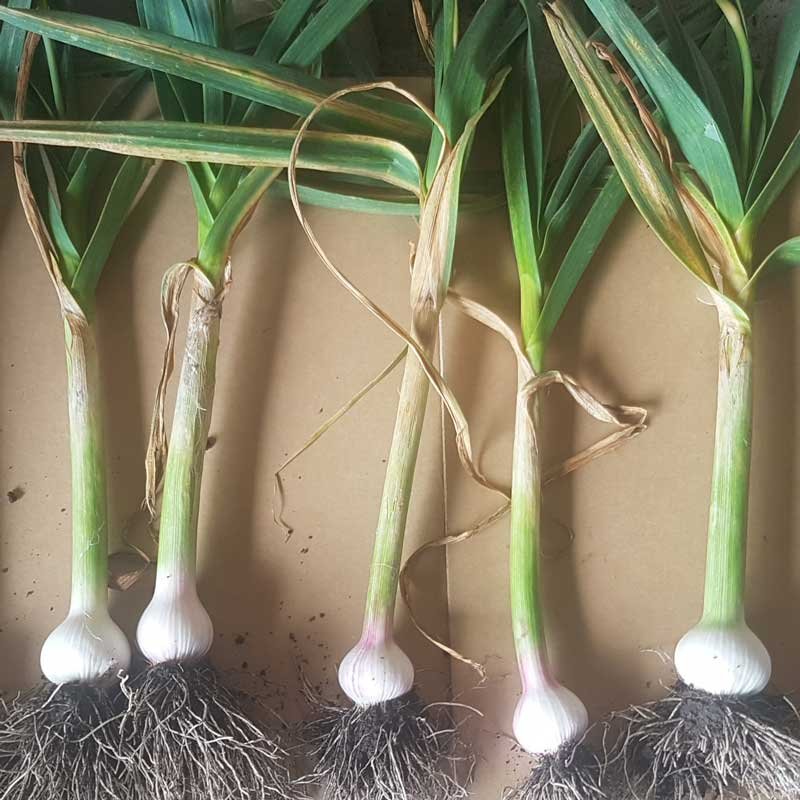 And so, I booted Printanor from my garden. I kept the best bulbs of Aja Rojo and Takahue to grow on the next year. And I developed a bit of a passion for heritage garlic varieties along the way. They grow better. And – in my opinion – taste better too. My third season coincided with the purchase of The Outpost. The purchase took a bit longer than anticipated and pushed out the sowing date.

The day after possession was officially transferred, I was here planting garlic and installing a weather monitor. It was August 1.

Garlic is supposed to go in around May-June. 1 August was about as late as I wanted to push it. I didn’t get a chance to do any soil prep except to weed an existing garden bed.

Given the delay, I wasn’t expecting a whole lot, but in December we got a pretty great harvest, which has set us up nicely for 2020.

This season, I have planted over 200 cloves of saved garlic in varieties I know will grow here. I have had the time to properly prepare a bed. And oh boy, I’m going to grow an absolute buttload of garlic. The garlic bed is 6 metres long and 3 metres wide. That’s more than triple the size of last year, and six times the size of what I grew in Year 2.

It’s taken me a few years to build the seed stock to do it, but I want to make these varieties more well-known and available to more Kiwi gardeners. So I want to grow a lot of it.

In stores, you can only buy Printanor and Elephant Garlic. But there are so many wonderful varieties around – you’ve just gotta search high and low to find them! Even when you do find them, sometimes they sell out too fast to get your hands on. This year’s garlic sold out within hours when it was offered to members at the Koanga Institute – I don’t think it went on sale to the public at all.

I’m up to three varieties now. Last year, I introduced another hard necked variety, White Rocombole, from Koanga. They did splendidly, and I think they’d be great in containers as they’re more compact and mature a bit faster. I think it will be another year or two before I have enough to offer gardeners, but I also think the demand is outstripping current supply, so I’d like to try step in to fill that gap.

But, I did manage to get a small amount of Aja Rojo and Takahue into people’s gardens this year. And hopefully next year I’ll be able to introduce them to even more. Last weekend we prepared our bed and planted over 200 garlic cloves, alongside a dozen or so flowering shallots. Starting a new garden begins with killing off the grass. We block the light with a giant sheet of polythene. This rotary hoe is a hero for breaking in new beds. Richard is hoeing in a layer of manure and lime. Garlic was spaced into 30cm rows, with 24cm between cloves. The bed as it is now, waiting for the garlic to pop.

It’ll be a 6 month wait until we know how Year 4 goes, but I’m already planning Year 5. I’ve been playing with refrigerating my garlic cloves for a few years to mimic winter before planting out into my not-very-cold garden. I think it makes a real and tangible difference, but I want to prove it. So I’m dusting off my Form 2 science experiment skills and designing an experiment to test my hypothesis next year.

Then, we’ll just need to wait til December to see what we pull up.

Postscript – I did a little reading after publishing this blog and found this article, which may explain my problem with Printanor. Might need to give it another go later in the year and see what happens. Either way, if you’re growing Printanor, it’s worth a read.