One of the most confusing, frustrating parts of maintaining our property for the last few years has been the fences.

The fact is, I am a townie. It frequently feels like I am ‘playing farmer’ here. And never so much as when I’m trying to fix the fences. Really, I have a little less than basic knowledge of how electric things actually work. Just enough to be dangerous, you could say. Exactly enough to not be messing about with electric fences, probably.

Unfortunately, it turns out our new cows do not give any moos about our fences. As long as they’re not being chased by dogs and they’re happy with their grass, they’ll respect the wire fences that physically barrier them from moving through. But temporary tape fences? They don’t care. They walk right through them. And they’ll extend that attitude to the wire fences if the dog is behind them. It’s actually pretty dangerous.

So I’ve resigned myself to finally learning about fences and specifically, to do the work to make our fence significantly ‘zappier’. It can be done, but because of the way our fence was built to begin with, it’s a lot of work, a lot of trial-and-error, and a lot of hills to walk up and down.

There are a few problems at play here.

Our fences are an amalgamation of two separate systems. Originally, the entire subdivision was on one central system running on one really good energiser. But we are right at the end of that system, and there are a lot of places for the power to ‘earth out’ before it gets to us.

The fence can ‘earth-out’ because it’s come off the post, because there’s a tree or gorse growing on it, or a lot of grass growing up it. It’s a problem because the ‘zap’ becomes less ‘zappier’ the further you get from the energiser, and every time it ‘earths out’, that’s some more ‘zap’ gone too. A tōtara growing magnificently right on the fence line. We’ll be moving this post out of the tree’s way.

It’s always been a bit unreliable, and there are 4 different property owners between us and the main energiser unit. So the former owners of our property installed a smaller energiser system to run down here.

Both of these systems are in place on different bits of the fence, and we don’t necessarily know which is what.

There’s also two ways to set up an electric fence. Without getting too technical, our set up appears to be a weird hybrid of both. This isn’t something you can ‘either/or’, it has to be one or the other. And this appears to be our biggest – though far from our only – problem.

How to make an electric fence go ‘zap’

We also need to make improvements to the earthing system. The three components of a fence are the energiser (where the zap comes from); the wires the energy runs along; and the ground (or ‘earth’).

The energiser is connected to both the earth, and the wires. When you touch a fence, your body completes the electrical circuit between the energiser and the ground (‘earth’), giving you a shock.

However it appears our ‘earth’ is woefully ineffective. We need to add extra ‘earthing rods’ (2m aluminimum rods which are shoved into the ground) and connect them with a highly-conductive wire. If we increase the amount of ‘earth’ the energiser is hooked up to, it should increase the ‘zap’.

It’s going to cost about $300 to do that just for the rods and wire. We’ll also need to install a new mains energy supply; move the energiser unit; and dig some trenches.

On our property, repeated droughts and deluges – along with a fairly steep slope – means the soil is constantly shrinking and expanding. The fence posts move and shift as a result. Sometimes they just outright snap. The fences require a lot of maintenance to keep the cows in. Some paddocks are in better shape than others. But it’s clear we need to put in new fence posts in places. Yesterday, we found the one shown above. It appears to have clean snapped off at the ground.

Wires come off the posts, and insulators need replacing. A functional electric fence is not something you can just ‘set and forget’, you need to maintain and check it regularly.

Farmers use a device called a ‘fault finder’ to check on their fences. It measures the current (‘zap’) and the amps, and tells you in which direction on your fence you’ll find a fault. It’s a handy device… if you can work out how to read it.

Our neighbours have always been happy to lend us their fault finder, but it’s never made sense to me. Even though they also lent us the instructions, it felt a lot like I was reading another language. Much like when I try to read sewing patterns, my brain feels like it’s looking at gobbledegook.

But I’ve been reading a lot of Gallagher instruction manuals lately. They’re really well written and I’m starting to get my head around how a fence should work, and what’s wrong with ours. If you’re trying to get your head around an electric fence, the manuals are all on their website and they’re very helpful.

I decided I wanted a Gallagher Fault Finder because it made sense. There are lots of YouTube videos featuring farmers explaining how they use them. The manual is written in plain English. I understood it.

It’s about $250 for a brand new Gallagher fault finder though. As a general rule of thumb, I need to have a think about spending that level of money. You might call me a tightarse and I wouldn’t disagree.

The fact is, I’d rather save the money for the new earthing system and fence posts. I felt like the fault finder could be a common enough device that I might be able to pick one up cheaper second hand. 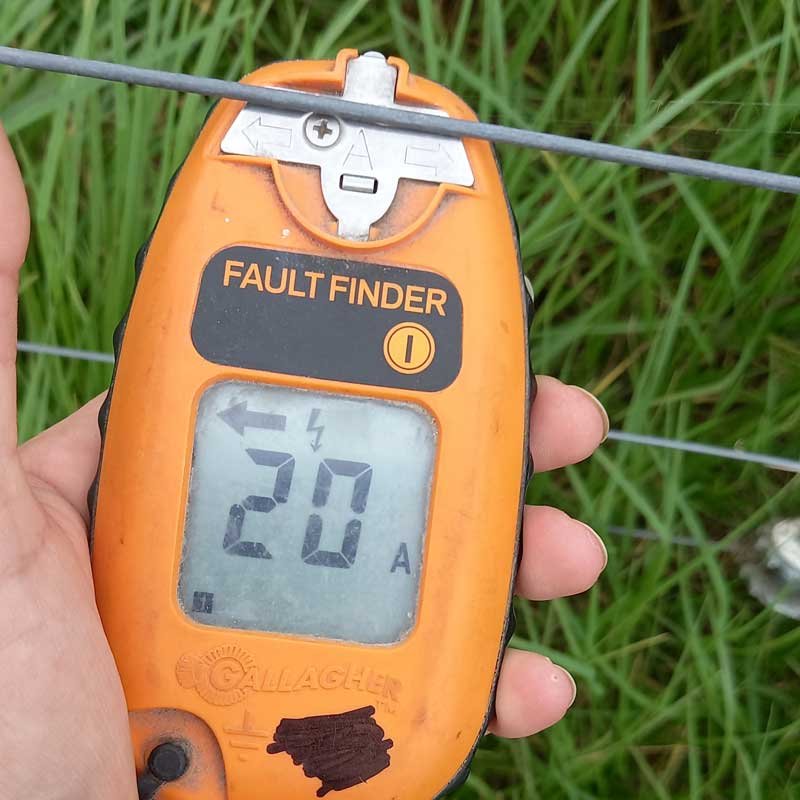 So I turned to TradeMe. There were a few listings, so I gave them a go. The first three auctions went out of my price range with bidding wars. But the fourth auction was a winner.

We actually got two – one that works, and one that doesn’t. Spare parts! For less than 30% of a new one. Score! I really am a tightarse who loves a bargain.

So for the foreseeable future, we’ll be walking all the fence lines, clearing vegetation, fixing insulators, and finding the faults. We’ll be mapping the path of the electricity, and working out which bits of our farm are running on what system. We’ll be disconnecting wires, reconnecting different wires, digging up wires, and upgrading connections.

There’s also the upgrade to our earthing system in an attempt to improve the ‘zap’. And probably some gates to install as well.

Then – hopefully – our cows will begin to respect the fences. We’ll be able to make use of them for pasture management, rather than chasing them all over the place and trying to convince them not to eat my garden.