Down the garden path A couple of weeks ago, I published a blog about the – quite frankly – horrendous shape of my winter garden. Putting it all out there on the Internet like that has provided the motivation to spend more time gardening. I’ve been working to tidy the place up and slowly, I’m knocking the garden into some kind of shape.

This week I’ve been working on our newest bed in preparation for planting potatoes at the end of the month. One of the tasks I’ve had to sort out is laying the paths with PVC plastic.

The paths in my garden are covered with plastic out of pure necessity. This isn’t about looking nice. To be honest, it’s not even about being a particularly good path. It’s entirely about killing grass.

When we moved into The Outpost, the former owners had developed beds that ran along the contour lines of the slope the garden rests on. It was a smart layout in that it would best capture the water as it moved down hill. But the long, skinny beds with long, skinny paths of kikuyu grass between them soon became a maintenance disaster. The grass spreads with long, thick stems that can travel quite incredible distances in search of light. They can travel below or above the ground, and form thick mats of impenetrable grass ropes. It can repopulate an area from a cm or two of stem or root fragment. It quickly repopulated the beds the former owner had carefully established, and from both sides.

Aside from glyphosate (aka RoundUp), the only thing I’ve found that truly eradicates kikuyu grass in Northland (where we don’t get enough frost to knock it back in winter) is blocking the sunlight. So before we moved in, I bought 200m² of plastic sheeting in a 4m x 50m roll. It’s been 2 years and I’m still using that same roll.

To begin with, we attempted gardening in the existing beds, but the grass was too much. Soon, we practically shaved the grass with a mower, laid down a huge sheet of plastic (on the left of the above photo), and left the garden alone for a few months.

When it came to designing the beds, I decided on 4m x 1.8m, with 1m wide paths. For the most part, that’s what we’ve stuck to. For a couple of years now, we’ve been lifting that sheet of plastic, repositioning it, and making new beds. The plastic is visible on Google Maps. 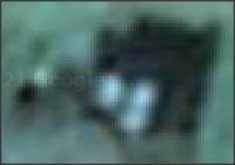 Whenever we made a new bed, I needed to lay a new path. As I’ve gained experience, I’ve improved my techniques. My more recent paths are better than my earlier attempts for a few reasons.

The previous garden beds haunt us in the wavy-nature of the first couple of paths. The dips are the lines of the old garden beds. These paths have effectively kept the grass off for nearly 2 years, but I avoid them if the plastic is wet. It’s easy to lose your footing on the uneven ground. I tried a herb path. This section of garden path near the strawberries is planted with lawn chamomile and pennyroyal. It’s pretty cool. The chamomile in particular likes to migrate into nearby beds, and the lawn is infested with weeds including strawberry and kikuyu, but it smells amazing when you walk over or mow it. I’ve tried gravel path. I enjoy the aesthetic, but there’s still a lot of weeds. And – of course – kikuyu. I got lazy when I divided one bed into two beds. I never covered the path and left bare earth. That path is currently growing garlic. And weeds – though (miraculously), not kikuyu.

The plastic does degrade, develop holes, and rip. I’ve begun “patching” it with duct tape. One day I hope to upgrade to something less awful, but for now the plastic vanquishes my enemy (this stupid grass) and makes this garden a bit easier to wrangle.

By about the third bed, I discovered a better way to lay my paths. I begin by setting a string line and digging out the edges. I hang the plastic over the edge I’ve dug out, and secure it by driving weedmat pins into the side of the path. The path itself is 1m wide, but the plastic is cut to 110cm, to give that bit of overlap.

I start at one end by securing the corners, then work my way back, pulling the plastic hard and placing pins at 30-40cm intervals on each side of the path. It seems really effective at holding back kikuyu. Once the soil is back against it and it’s settled a bit, it looks pretty good – even if it is a bit of a hazard in wet weather.

The paths that run ‘horizontally’ across my garden are a real issue. Mostly, I haven’t covered them in plastic as they’re uneven. The level rises on one side of the path. Combined with the plastic, it makes them really slippery and difficult to work on. So even though it means another source of kikuyu invasion, they’ve been left uncovered, until now.

As time goes on, I’ll level and terrace along the paths. I’ll even out the dips, and eventually, I’ll replace the plastic (with more plastic, at least at first). When the grass has been completely gone for at least a couple of years, I’ll be able to use wood chips or gravel instead, but I feel like that’s still a long way off. It’s still a lot of work… and I have to kill the grass first.