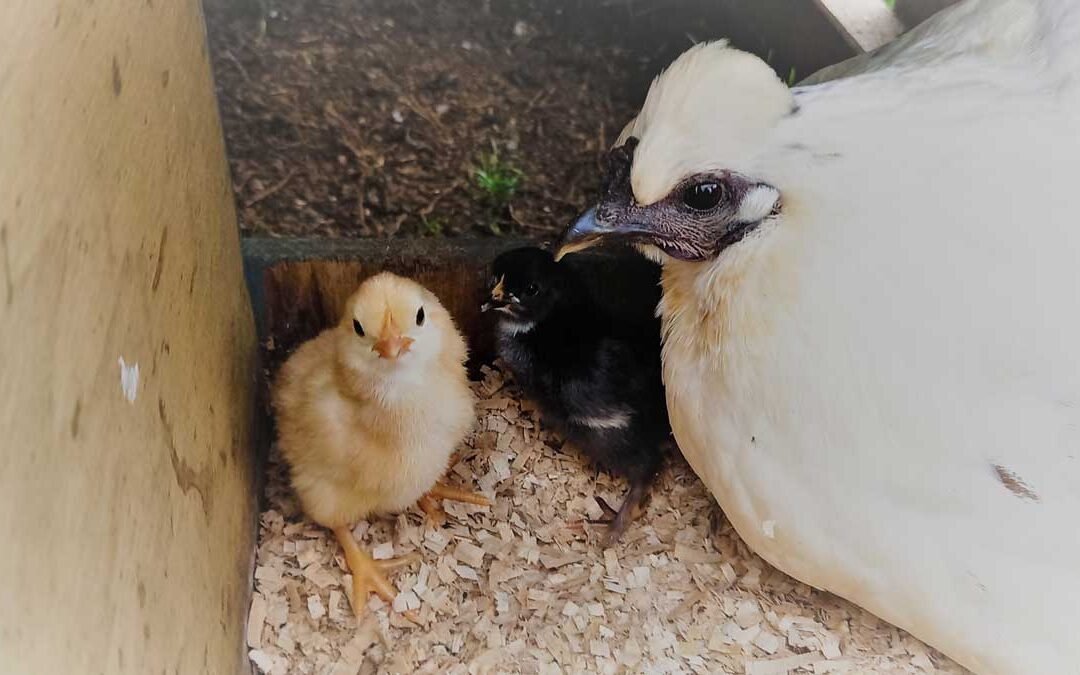 You remember the random chickens I was given earlier this year?

Well, they grew up. We kept the 3 females and one of the males. They integrated in with our main flock and the females have been giving us some cute little eggs, while the male has been keeping them protected from predators. It’s worked out well.

One of the females turned out to be a breed called a ‘Silkie’ – or, at least part-silkie. We’ve named after a drag queen because I like the pun. Her full name is Silkie Nutmeg Ganache. The good news for us is silkies are known to be broody, and good mothers. About a month ago, Richard and I noticed she had been sitting in the nesting boxes, and our eggs were warm when we picked them up. She had turned broody – refusing to leave the eggs she was sitting on.

And not only that, we noticed she was quite… nice about it. She didn’t peck at us when we moved her to get the eggs. She’d just get out of the way, giving a cluck of annoyance at most.

There’s a bit of vacant space in the chook house at the moment, so we thought we’d give her a chance to be a mum.

Last time I tried hatching eggs, I bought fertilised eggs on TradeMe because we didn’t have a rooster. We popped them under a Hyline that always got broody in summer. That experiment didn’t work out, leaving us with half a dozen rotten eggs to dispose of 6 weeks later.

But with a rooster in the flock, every egg is fresh and fertilised. Every egg has a chance of becoming a chicken. I don’t have to go anywhere, trade anything, or really even handle the eggs at all.

The only thing we had to do was not take the eggs.

So I quietly tried a new experiment. About a month ago, I took a pencil down one afternoon when I went to feed the poultry. Instead of taking the eggs, I marked them with an X and popped them under Silkie. There were 3, which seemed like a good, low-risk number to start with.

For the last month, I haven’t been wildly optimistic this would work. We kept finding random eggs under Silkie, which seemed a bit odd, and indicated she wasn’t on the eggs all of the time. Once I found her in the wrong box entirely, and the eggs with an X felt cold.

We’ve since worked out that when another chook needed to lay, Silkie took the opportunity to eat, poop, and drink. When the other chooks laid in ‘Silkie’s Box’, they were keeping her eggs warm and giving Silkie a break. She is a clever little chicken.

Still, Silkie would move when we wanted to check for new eggs under her. And it was easy to tell the experimental eggs from the new ones. I’d kind of forgotten we were even running the experiment when Richard held an egg last week and remarked ‘oh yep, this one’s definitely got something in there!’

An egg near hatching can kick and move like a baby in a womb. If you’re holding the egg, you can feel it. Sometimes they peep too.

But I never wrote down when I put the X’s on the eggs. We had no idea when to expect them because I’d had so little real faith that this would even work.

So when I woke up on Wednesday afternoon from a nap to the news Silkie had babies… well, I was in a bit of disbelief. I still am in disbelief. I don’t know if I believe these chicks will make it to adulthood, even though Silkie has done nothing but prove she is a natural mother. This is our third year with ducklings on the farm. To put it bluntly, ducks are terrible mothers. For the last couple of years we’ve found countless dead ducklings as we went about our day. It’s depressing.

It seems as soon as they’re alive and walking, the ducks want to take their young on epic adventures. They walk absolutely incredible distances from a very young age. It kills them.

The only way we’ve found to turn ducklings safely into ducks is to pen them in a small area with their mum. Inevitably, the mum is annoyed and defensive. The area ends up a bit gross and requires fairly intensive management. It’s not an activity that rates highly with me.

Our experience with the ducklings means we enjoy the cute, knowing it may not last, and that babies can be easily culled by nature. It’s left me a bit pessimistic about the chicks, even though I know Silkie should have every mothering instinct the ducks lack. The difference in their size is quite amazing, even from the beginning. The Hyline is a good 30% bigger than the wee black one, matching the size differential between their bio-mothers.

We’ve set them up with their own nesting box at ground level. They have their own water and food – we got a bag of ‘chick starter’ just for them. It’s really just a matter of wait-and-see.

But for us right now, the good news is we have a wide range of genetics, and Silkie willing to mother all who are left beneath her. In theory, our flock can self-sustain for a few years at least, which is pretty cool. The random gift of chickens I received earlier this year appears to have been the right mix to get us where we wanted to be all along.