Richard and I have our own little zoo going on at The Outpost: dogs, cats, chickens, ducks, and whoever else shows up really.

They provide us with some real moments, and occasionally I compile those moments into a blog. This is the third I’ve published: here is part one, and here is part two if you’d like to read them.

A small content warning: There are some photos of dead animals in this blog, just in case you don’t want to see them.

A few weeks ago I was writing an update about things that we’ve been up to. One of the things I wanted to show was the growth of the previous year’s plantings. So I wandered around the property, taking some fairly boring photos of trees.

Our dog Hine has a habit of jumping up when she wants to say hello. And as I aimed my phone at a row of trees, it happened: I took the photo at the top of this page.

My only thought at the time was “please let that have worked”. I checked the camera roll and found possibly the most delightful photo I’ve ever taken.

The night of the Puriri moth

The bush surrounding our place is full of ancient puriri (Vitex lucens). Big, ancient trees grow up (and sometimes sideways, they’re seriously difficult to kill) all around us.

Puriri moths spend most of their lives as caterpillars living in tunnels they make in trees. Often puriri, but not always.

Wikipedia says this usually happens in October, so from September to December for the last two years, I’ve been waiting. And they never showed.

But then, in April this year, Richard was letting the dogs out for a wee while I was doing yoga when he shouted out “babe! Come look at these crazy moths outside!” 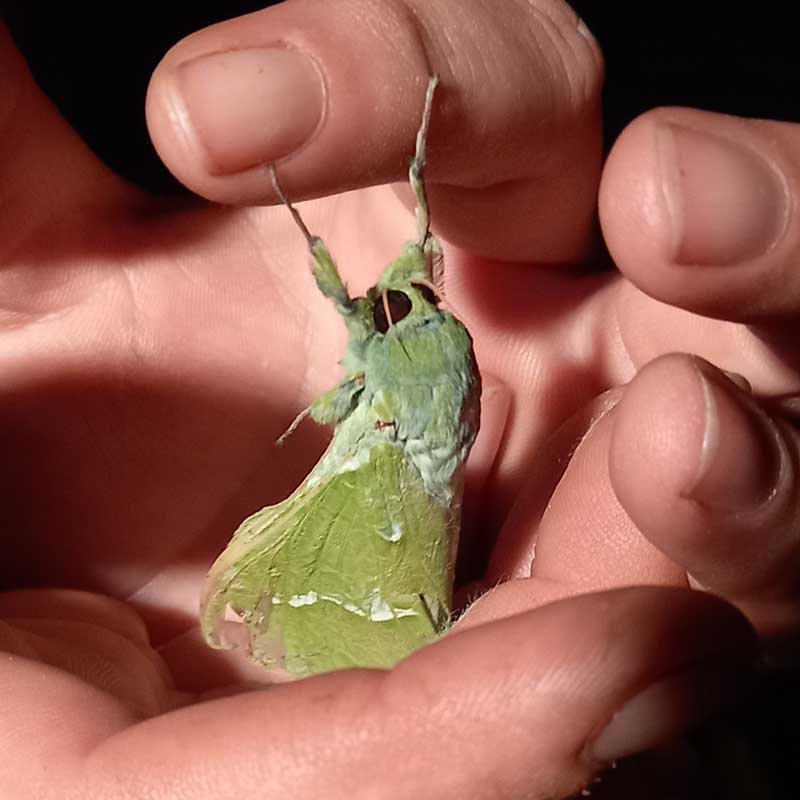 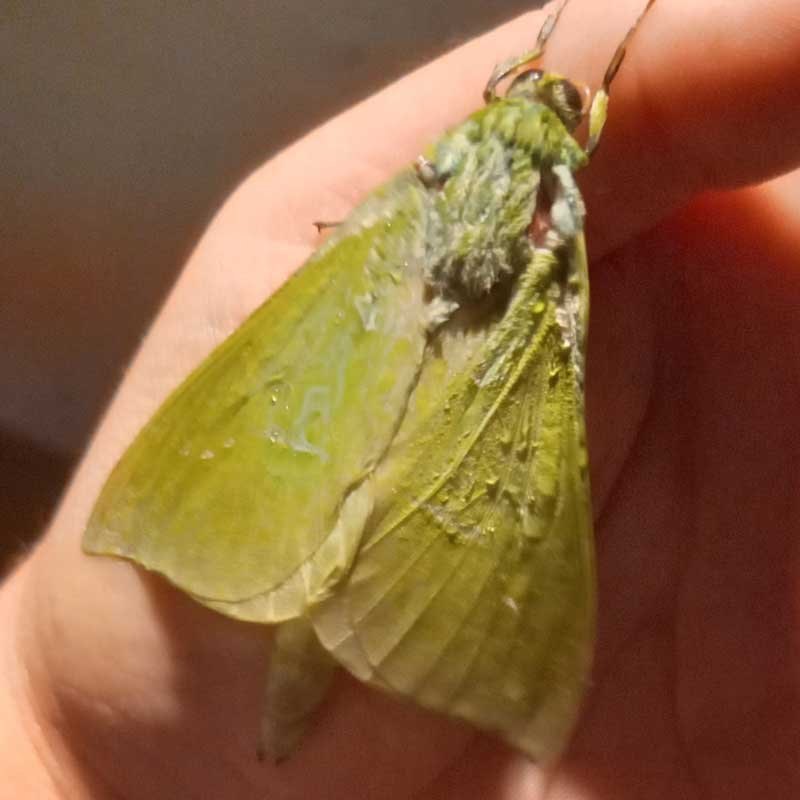 They’re absolutely stunning creatures and I hope to witness this event several more times in my lifetime.

There’s a decent number of wild pigs around us. We have a love-hate relationship. Mostly they love the food and shelter they get from the land, and I hate the damage they cause.

Turns out, our dog Roxy also has a love-hate relationship with them. She hates them and wants to kill them. But she loves hunting and chasing them. For a long time, it was short chases off the paddocks. The pigs would scurry under fences or into patches of gorse and Roxy would call back.

But then one day Richard took her for a walk. As they got near the bush, Roxy stopped for a moment, and then took off. In seconds, a wild panicked screaming was heard and piglets came flying out in all directions followed by Roxy with a piglet in her mouth!

Roxy took off to the cabin in a second, her kill making small screams as she adjusted her grip. When she reached the fence, she stopped and dropped the piglet. Richard caught up with her and got this photo. You can see her body language says “I’m very sorry, I was naughty”, except… well, nobody around here is sorry about one less pig in the bush. The pig was buried in the garden where it’ll become nutrients for our plants.

We’ve been pretty confident there are kiwi in the bush around us for a while now. Early-on, we were out spotlighting possums when we heard a noise we knew in our hearts was a kiwi call.

We got back to the cabin and played some kiwi calls on YouTube. And suddenly we weren’t sure. Comparing a real sound to a remembered sound is hard.

After about the 6th call, I went outside and waited. It felt like forever, but just as I was getting ready to give up, it started.

I hit ‘record’, I held my phone into the night air, I held my breath. A female started and the male replied. It was the best, and last call of the night.

The recording isn’t the greatest, but it was enough. I uploaded it to iNaturalist and went to sleep. By the next morning I had confirmation: we have kiwi nearby.

Now we know, we hear them regularly. And yes, we are currently looking into aversion training for Roxy.

I arrived home from work last night and Richard met me on the driveway. We were talking when I saw a rat jump up on top of my wormfarm, run the length, and dive back into its hiding spot.

It was too much. I don’t want to see rats. Given where we live, I know they’re just a part of the ecosystem around us: but I will not have one scurrying right in front of me in broad daylight within our compound. Just, no.

Richard decided that rather than waiting to the next day when I could come home with a rat trap, we’d take the dogs to the scene of the crime and see if they could sort it out.

We began by digging out the wormfarm, but Roxy quickly let us know it was under an overturned bin in the greenhouse.

The bin was covered in a collection of my succulents, so Richard and I went to work moving them. We cleared the top and lifted it up. Roxy had been right: a big ship rat bounced and went flying towards the table which has a collection of old plastic pots crammed underneath it.

Roxy pounced, sending succulents and cacti flying. The table would have been overturned as well if Richard hadn’t stopped it. The rat tried to make a second dash, but this time found both Hine and Roxy waiting, and dove back towards the pots.

It was getting dark and we knew this was going to be a destructive exercise: we dragged Roxy back inside, but she didn’t forget about it.

The next day I went to work and purchased a rat trap before my shift. But by the time I’d taken my first break, this photo was waiting for me. I set the trap anyway and it hasn’t caught anything since. Looks like Roxy sorted the problem for us. 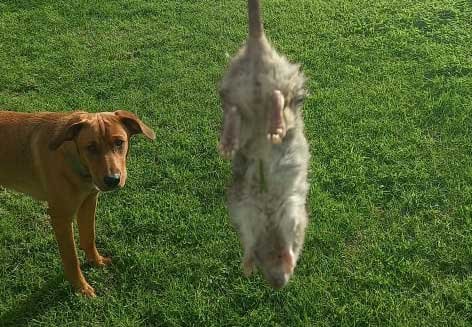