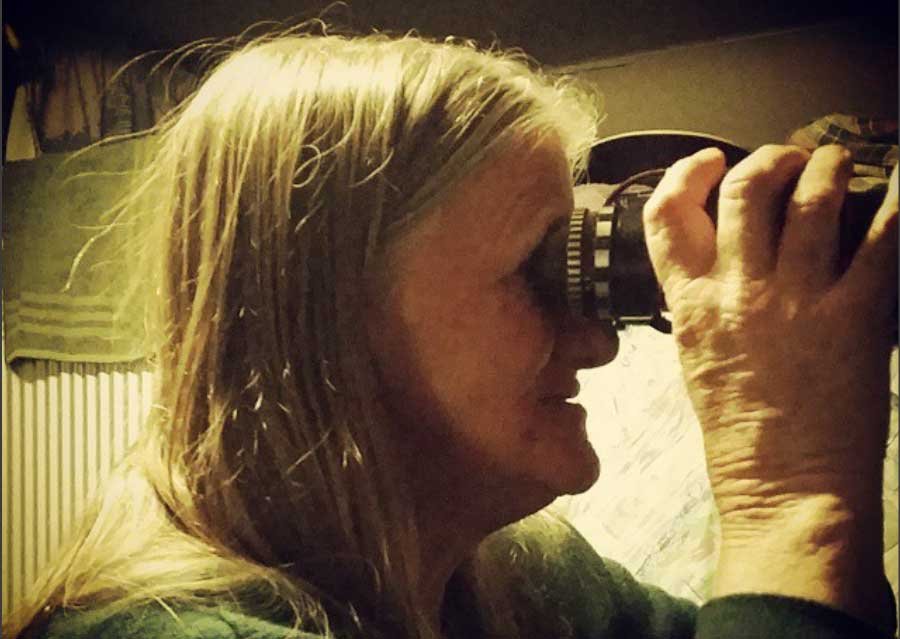 I took this photo of my mother back in 2014. I’d joined her to celebrate my birthday in Matata at a DoC camp, and we wanted to know if the fish and chip store was open. She whipped out her binoculars and had a look over the estuary. I thought it was the funniest and most ridiculous thing, but I had to admit it was effective. The store was open, and we wondered over to have fish and chips for dinner that night.

Mum didn’t live strictly rurally, she lived in a house truck and bounced around the country as she pleased. I saw her whip out those binoculars so many times and never quite understood their importance. I thought it was just a weird quirk of hers.

Maybe I’m just my mother’s daughter, but since we arrived at The Outpost, we’ve come to realise they’re a pretty essential piece of kit. I don’t really know what happened to Mum’s pair after she passed away, but Richard’s dad has equipped us with a couple. One pair lives right beside our door because we use them so often.

A few months ago, we spotted an animal we couldn’t explain. Around 150m from the compound, we’ve got 2 adjoining paddocks at the top of a rise. We could see our 4 cows, and then, in the paddock next door, there was either an unexplained cow, or the biggest wild pig I’ve ever seen.

Whipping out the binoculars, we discovered it was a cow! Turned out, our neighbour had picked up a bunch of young bulls, and not all of them respect electric fences. While the first time it was a surprise and a mystery, now it feels like a regular occurrence. But still, it’s handy to know what we’re dealing with before we wander out and take care of it.

Sometimes we’re just nosy and want to check what the neighbours are getting up to. We don’t tend to use them as a regular snooping tool, but if something’s going on, they often give us a quick understanding of the situation.

Like last week, when some work was going on at the top of a nearby mountain. The mountain is covered in recently cleared and replanted pine forest. There was a digger and a couple of utes up there for 3 or 4 days. The mountain is about a kilometer from here, and much higher than our property, but we could hear it. Having the binoculars meant we could see it as well. We thought maybe we were getting a new cell tower up there, but the work seems to have stopped and the machinery is gone, so maybe we’re not that lucky.

When you own the equivalent of 5 city blocks, sometimes you can’t see what’s going on at the other end of your property. We can’t see everything from our compound due to the sloping topography, but what we can see is made easier with the help of a simple tool.

Without them, we’d know less about our area and we’d have to go on a lot more walks. I finally understand why mum kept them nearby, and reached for them so often.