I love my worms I’ve heard a few of my friends say “I think I might start a compost bin” lately. It’s a great sentiment – they reduce your waste substantially, and give you valuable compost for your garden. Also, all my friends are old like me. So naturally we care a great deal about things like compost now.

Starting a compost bin is a great idea, but I reckon there’s an even better idea – starting a worm farm.

If you don’t make a lot of garden waste – or maybe you don’t even have a garden – then a worm farm might be your cup of tea. They’re less work, they take up less space, they don’t smell, and they still minimise your waste. But they seem to suffer from a lack of marketing, so I thought I’d give them some free publicity.

Worm farms don’t need turning like compost does. The worms do all the work there. We use a 2-bin system. Every couple of months I have to swap the bins around so they have some time to digest what we’ve put in. Each bin needs emptying and re-starting maybe once a year when it gets full. There’s no carbon-nitrogen ratio to worry about. They’ll take your kitchen scraps, your tissues, your paper, your hair, your pet’s fur – even the fluff from the vacuum cleaner!

You don’t really want to give them a massive pile of citrus or onions, but that’s really the major consideration.

Depending on the style of bin you have, they’re compact and I’ve never come across a smelly one. If I had known about worm farms earlier, I probably could have incorporated them into nearly every flat I’ve ever lived in. Even in a hostel situation, I could have had a small one on a shelf.

When you make compost, you get… compost. Unless you have a lot of materials, composting is also pretty slow. But worm farms have TWO main byproducts. The first byproduct is a liquid called various names, but we call it Worm Wee. You’ll start getting this within a month. When diluted 1:10 with water, it’s an amazing fertiliser for your indoor and outdoor plants.

The second product is vermicast. Once worms have thoroughly digested your detritus, you are left with a highly valuable compost alternative called vermicast. If you don’t have a garden, I guarantee the first gardener you offer a bucket of vermicast to will take it gladly. It’s gold for enriching soils.

If you’re looking to get into worm farming, you need two things to get started: a wormfarm bin, and some worms.

We have the bins sold by The Compost Collective, but there are several designs available. I love wormfarms so much that I have plans to make a really big one out of an old steel bath using Geoff Lawton’s method.

Worms are pretty easy to get your hands on. You want Tiger Worms. Ask around on your local Facebook group. Or if you live in New Zealand, I’ll be happy to send you some if you cover the postage, just get in touch.

Your worms should ideally live somewhere shady and cool, but we don’t have a lot of those places here and ours get sun for most of the day. They’re fine, though the bin might be getting some UV damage – hence the decision to go to a larger bath.

For the finer details, I’d highly recommend checking out The Compost Collective’s free online wormfarming resources. Many local councils and community groups are running compost workshops now as well. If you have a chance, you won’t regret going – not least of all because it makes the bins cheaper! 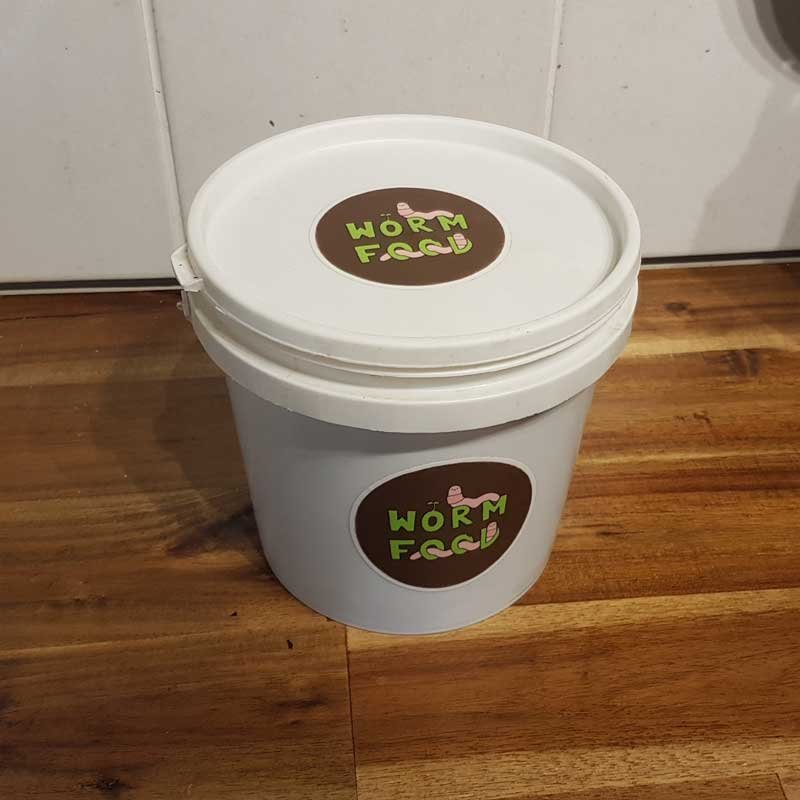 In our house, we have a bucket that takes the day-to-day waste we create. It gets emptied about once a week. Actually we have several buckets for different streams of rubbish.

So many buckets got confusing, so a year ago I commissioned an artist – Xanthe van den Bosch – to design some stickers for our worm bucket. I really loved what she came up with and had them produced last year.

I have some extras leftover, so I’ve put them into my online store (don’t worry, Xanthe gets a cut from every sticker sold too). I’ll probably only run this one batch, so they’re there until they’re not. You can get them as a ‘container set’ with 3 stickers, or as single stickers.

Sending organic waste to landfill just doesn’t make sense. Due to the methods they use in landfills, it’ll probably never properly degrade.

So much of our day-to-day rubbish is organic. Since we started our composting and wormfarm journey, we’ve drastically reduced the amount we send to landfill. Partially because we’ve started making different choices as consumers (wooden cotton buds instead of plastic ones, bamboo toothbrushes etc), and partially because our waste is diverted before it gets there.

Our worms are little golden heroes who probably contribute more to the household than any of our other animals. They eat my snotty tissues and they say thanks with premium garden fertilisers. I’m a huge fan of worms, and I hope you’ll consider inviting them into your life as well.